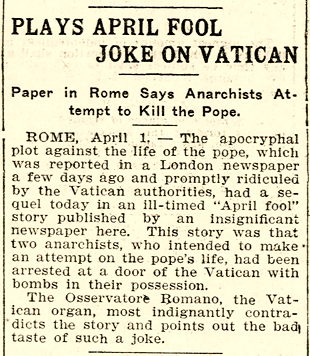 Rome, April 1 — The apocryphal plot against the life of the pope, which was reported in a London newspaper a few days ago and promptly ridiculed by the Vatican authorities, had a sequel today in an ill-timed 'April fool' story published by an insignificant newspaper here. This story was that two anarchists, who intended to make an attempt on the pope's life, had been arrested at a door of the Vatican with bombs in their possession.

The Osservatore Romano, the Vatican organ, most indignantly contradicts the story and points out the bad taste of such a joke.
April Fool's Day, 1904
Tweet