The Great Loveland Potato Hoax: Was this the first viral fake photo ever?

Rick Padden of Loveland, Colorado has written a play about a famous hoax from his own town: The Great Loveland Potato Hoax. It'll be on stage at Loveland's Rialto Theater.

The Loveland Potato Hoax took place in 1895. It involved a potato farmer who created a fake photo of himself holding a giant potato. The photo started circulating around the country, passing from one person to another, until it eventually came to the attention of Scientific American, which published it, mistakenly presenting it to readers as a real photo. The farmer was subsequently flooded with inquiries from people who wanted pieces of the potato so they could grow their own giant spud. 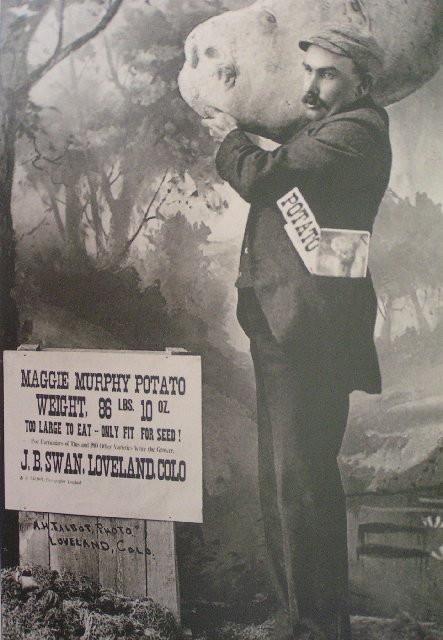 The hoax is significant because the photo is quite possibly the first viral fake photo ever — predating by over 100 years such famous viral fake photos as Snowball the Monster Cat and Touristguy.

I can't think of any other photo that would possibly qualify as a viral fake photo before this one. There were definitely famous fake photos before 1895, such as the fake heroic photos of Abraham Lincoln. But they didn't circulate in a viral fashion. At least, not to my knowledge.

Anyway, I thought the hoax was worth adding to the hoax archive, so that's what I've done. The comment link is redirected there.