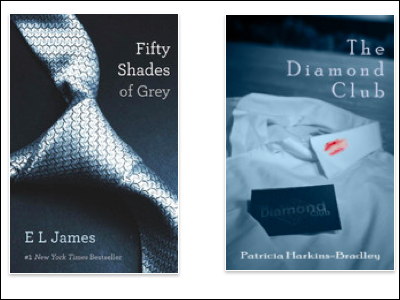 They came up with a title for their novel, The Diamond Club. They also sketched out a rough outline of a plot:


When Brianna Young discovers that Roman Dyle, the man she built a relationship and a multimillion dollar company with, has gotten married to another woman behind her back, she embarks on a journey to realize her dreams of professional and sexual revenge for everything she had endured at the hands of Roman.Brianna seeks her romance from The Diamond Club, an exotic gathering of the Bay Area's most attractive and interesting people, from angel investors and airline pilots to worldfamous chefs and dubstep artists.

They singled out three qualities their novel would need to succeed:They attributed their novel to a fictitious author, Patricia Harkins-Bradley. But they enlisted the help of their readers to do the actual writing. In this way, none of the authors had read the entire book, and there was little cohesion between chapters. So they could guarantee that the novel wouldn't gain readers on the basis of its great writing.

Finally, and this was a key part of the experiment, they asked all their listeners to buy the book, priced at an affordable 99 cents, in order to push the book into the top 10% at iTunes. Their theory was that once the book broke into the top 10%, momentum would take over, and people (who weren't listeners of their podcast) would buy the book simply because other people were buying it.


It looks like their experiment has succeeded. The book has been hovering around in iTunes Top 10 List. It's also available for the nook and kindle. Reportedly, it's already earned Young and Bushwood close to $20,000.

Similar literary experiments have been conducted before. Back in 1968, Mike McGrady and his friends at Newsday first proved that a crowdsourced book could become a bestseller with their sex-filled novel, Naked Came the Stranger.

And even earlier, in 1956, deejay Jean Shepherd and his listeners proved that publicity alone could create demand for a (non-existent) book — I, Libertine.

Boy oh boy did I predict this or what? The public follows trends in literature just as if it were fashion. Good for these guys for figuring it out and proving how gullible readers are.
.
Posted by ms Burton  on  Sat Aug 11, 2012  at  07:47 AM
Commenting is not available in this channel entry.