With April Fool's Day fast approaching, I've been working on the April Fool Archive, trying to add supplementary material, etc. In the course of which, I realized that I didn't have much information about the early history of April Fool's Day in Germany. Specifically, what is the earliest German reference to April Fool's Day? Knowing this would give us an idea of how long the Germans have been celebrating April first.

That question was harder to answer than I had anticipated.


The Diet of Augsburg, 1530
There's a German origin story about April Fool's Day that alleges the celebration started on account of a meeting of the Reichstag in Augsburg in 1530. The meeting was called to address a number of issues, such as trying to unify the Germans against the Turks, addressing religious disputes, and regulating coinage.

Augsburg, circa 1500
According to the story, a special meeting to address the coinage issue was scheduled for April 1, and in anticipation of it many speculators began to trade currency, hoping to profit by anticipating whatever new regulations would be enacted. But then the meeting was delayed. Not once, but several times, which caused a financial crisis among these speculators. A kind of 16th century stockmarket crash. And so these speculators were mocked and became the first April fools.

This origin story isn't very believable. Yes, the Reichstag did meet in Augsburg in 1530. It was scheduled to meet on April 8, but then it was delayed until May 1, and then delayed again until June 20. That much is true. But was there a special meeting to regulate coinage scheduled for April 1? I haven't been able to confirm that. But even if there was, and the speculators were mocked, why would this have inspired a custom of April 1st pranks in other parts of Europe? Because we know that by 1561 the custom of April 1 foolishness was already established in Belgium and the Netherlands. That timeline doesn't make any sense.

Also, there's no historical evidence that backs up this origin story. No literary references, or anything of that kind. The earliest references to it that I can find appear in the late 19th century. For instance, it's described (and dismissed as false) in the 1871 issue of the Dutch journal De Volksvermaken.


The First Reference?
So if we dismiss the Augsburg story as a fanciful tall tale (one of many fanciful tales about the origin of April Fool's Day), then what was the actual, first German reference to the custom of making fools on April 1?

A lot of online sources repeat this claim. For instance, the magazine Stern says it, as do many other sites.

The problem is, none of these sites provide a citation specifying what text this phrase appeared in back in 1618. Scholarly articles about the history of April Fool's Day in Germany (the few such articles that exist) aren't any better about providing a citation to back up this claim.

But after a lot of searching, I finally found a German dictionary that provided a citation, Trübners Deutsches Wörterbuch (1939). It tells us (once you decode the old-fashioned font) that the phrase appeared in Wolfgang Schönsleder's German-Latin dictionary, Promptuarium Germanico-Latinum, published in Bavaria in 1618. 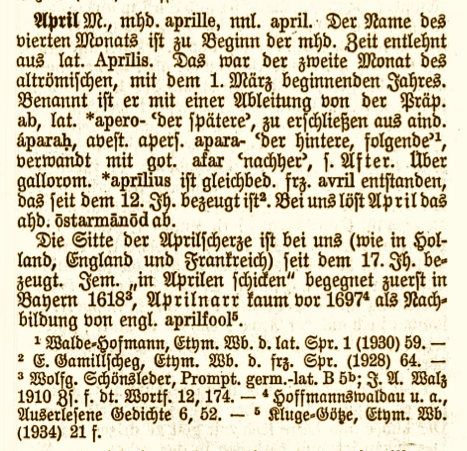 Trübners Deutsches Wörterbuch (1939), page 117
I thought I'd have to take Trübners' word for it, but when I checked online, I discovered (to my surprise) that Schönsleder's 1618 dictionary has been scanned and is available on Google Books. So I looked through it, but I couldn't find the phrase "in den April schicken" (or any variation of it) in there. 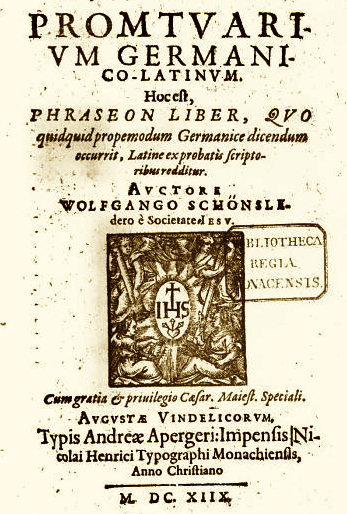 Then I noticed that there was more than one edition of Schönsleder's dictionary, and sure enough, in the 4th edition (published 1647) I found the phrase "in Aprillen schicken," which Schönsleder defined as "calendis Aprilibus circummittere" (i.e. to send around on the calends of April, or on the first of April). 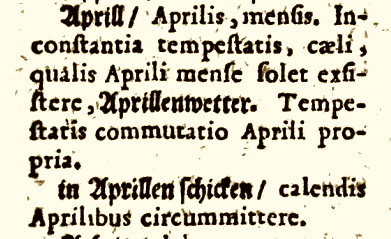 So the editors of Trübners Deutsches Wörterbuch evidently had access to a later edition of the Promptuarium Germanico-Latinum. (If you look at their reference closely, you see that they cite the 5th edition specifically.) They saw that the phrase "in Aprillen schicken" appeared in it, and assumed that the same phrase must also have been in the first 1618 edition, without checking to see if it actually was.

And ever since then people have been repeating the claim that the first German reference to April Fool's Day appeared in 1618. But no, it didn't. If the Promptuarium Germanico-Latinum is the source we're using, we can only say that it listed the phrase 'in April schicken' in 1647.


So when was the actual first April Fool reference in German?
If you look around enough, you'll find a few sites that claim it was in 1631. Though again, they don't specify what text the reference appeared in.

But I repeated the process of looking in old German dictionaries and encyclopedias, and eventually came across the Handwörterbuch Des Deutschen Aberglaubens (1927), which listed 1631 as the earliest April Fool reference in Germany, and cited the Mecklenburgische Volksüberlieferungen (1906) by Richard Wossidlo as the source for that date.

And yes, this leaflet verifiably exists!

A copy of it was sold last year by the Zisska & Schauer auction house for $900! The auction catalog describes the leaflet as an "Anti-Catholic lampoon, in which Count Tilly is depicted as a vagabond April fool on his way to Rome to seek refuge there from the Swedes." It also lists the publication date as 1632 (not 1631), and provides a small image (below) of the leaflet. 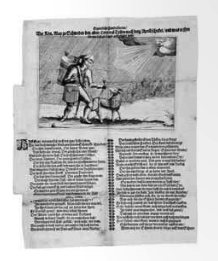 Who was this Count Tilly? He was Johann Tserclaes, Count of Tilly. Wikipedia tell us that he "commanded the Catholic League's forces in the Thirty Years' War. He had a string of important victories against the Protestants but was then defeated by forces led by the King Gustavus Adolphus of Sweden." 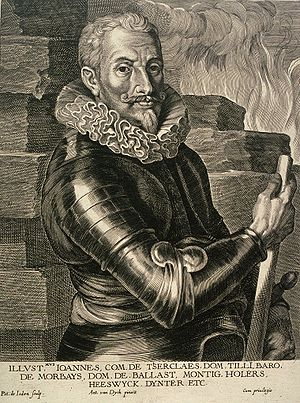 But wait, there's more!
The 1632 April fool reference is a good one, but there's an even older one.

This article describes a "mess of documents" found in the Strasbourg City Archives. These documents were written by or for Lorenz Fritsch, a glazier (glass maker), in the first decades of the 17th century, up to 1625 (approximately).

The papers included a strange variety of writings: recipes for food and medicines, diary notes, sermons, songs, aphorisms, etc. The article then reproduces some of these writings. And in what appears to be a diary entry for April (year unnoted) we find this line:

Of course, it would be nice to check these Strasbourg city archives to verify that these notes really were as old as the 1888 article claimed. But there's really no reason to doubt the veracity of the article in the Jahrbuch für Geschichte, Sprache und Literatur.

So there you have it. The answer to the question, 'What's the earliest German reference to April Fool's Day?" is that the first reference appears to be an entry in a Strasbourg glazier's diary written circa 1625.

Great piece of historical detective work. Thanks a bunch!

Too bad this will never make it into German Wikipedia for you're not a printed source and original research is not allowed. :(
Posted by Krischn  on  Fri Mar 21, 2014  at  10:20 AM
Commenting is not available in this channel entry.