The Flemish writer Eduard De Dene published a comical poem in 1561 about a nobleman who hatches a plan to send his servant back and forth on absurd errands on April 1st, supposedly to help prepare for a wedding feast. The servant recognizes that what’s being done to him is an April 1st joke. The poem is titled “Refereyn vp verzendekens dach / Twelck den eersten April te zyne plach.“ This is late medieval Dutch meaning (roughly) “Refrain on errand-day / which is the first of April.“ In the closing line of each stanza, the servant says, “I am afraid… that you are trying to make me run a fool’s errand.“ (Thanks to Marco Langbroek for the Dutch translation.)

This appears to be the first clear reference to a custom of playing practical jokes on April 1st. Because of this reference, historians believe that April Fool’s Day may have originated in continental northern Europe and then spread to the British Isles. 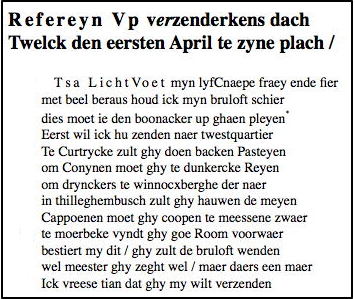