Baby Yoga, or Swinging Your Kid Around Your Head

Infant learning and development is a field full of dubious theories, because there are so many desperate parents willing to try anything that might give their kids a slight edge-up in life. So the stage is set for Baby Yoga, aka "dynamic baby gymnastics," aka 'swinging your baby around your head.' Its practitioners claim that if you're not doing this, then you're depriving your child of an important developmental opportunity.

Check out the video below which shows Elena Fokina demonstrating some Baby Yoga moves. Warning: if the sight of kids being swung energetically around might disturb you, then you probably want to skip the video. Previous videos of Baby Yoga posted on youtube have been banned because they caused such an outcry. (See this BBC News story from Feb 2011).

Anticipating that this video might also get removed from youtube, here's a few screenshots of Elena in action. 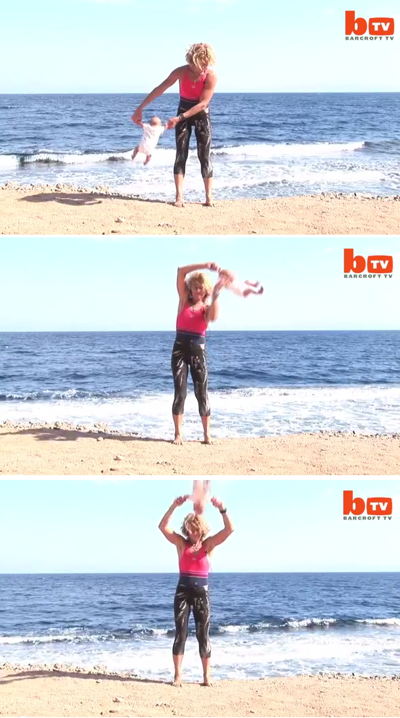 According to the video, the practice of Baby Yoga originated in Russia -- its founder being Igor Borisovich Charkovsk, who also advocates the health benefits of dunking kids in water over and over again. More info: anorak.co.uk.

As one would expect, mainstream pediatricians warn that swinging your kid around like a rag doll could be very dangerous if you lose your grasp on the kid.

This is really dangerous. A perfect way for your baby to develop a lethal shaken baby syndrom: http://en.wikipedia.org/wiki/Shaken_baby_syndrome
Posted by LaMa  in  Europe  on  Sun Mar 11, 2012  at  03:07 PM
Not to mention dislocating limbs. Honestly, kids get plenty of exercise just by being kids--crawling, walking, running. They don't need to be swung around someone's head.
Posted by Crafty Dragon  in  Montana  on  Sun Mar 11, 2012  at  06:37 PM
Also, the baby in the video is definitely not enjoying being swung around like that. My mind is just boggling at people who think this would be a good thing.

And if being swung around like that is an important part of the developmental process, then pretty much every baby in history must have had a stunted development.
Posted by Accipiter  on  Tue Mar 13, 2012  at  07:30 PM
This is child abuse, and they should be jailed. What a lunatic. Who would let someone do that to their baby???
Posted by Crater  on  Sun Apr 01, 2012  at  10:08 AM
I think this is terrifying!

I've been a reader for a few months and finally joined the site. Great work, I spend hours reading these great articles, 😊
Posted by Mel  on  Mon Aug 06, 2012  at  12:13 AM
Commenting is not available in this channel entry.