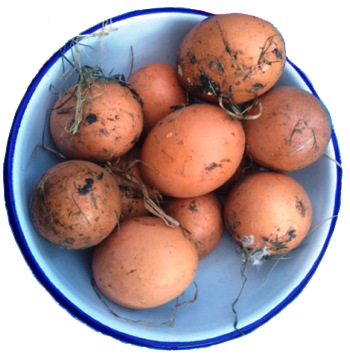 In 1973, the Dutch egg industry noted a drop in sales. After studying the situation, its analysts decided that the problem was that grocery-store shoppers were put off by the antiseptic appearance of the factory-cleaned eggs on the shelves. To consumers, the sparkling clean eggs seemed to represent the "plastic and concrete style of modern living."

To remedy this, the Dutch Egg Board decided to stick mud, manure, and bits of feather onto the eggs (after they had been cleaned) in order to artificially give them that "straight from the farmyard look."

J.T. Mellema, head of the Egg Board, noted that a bit of carefully placed dirt would make the eggs "look real and give back that old farmhouse touch." 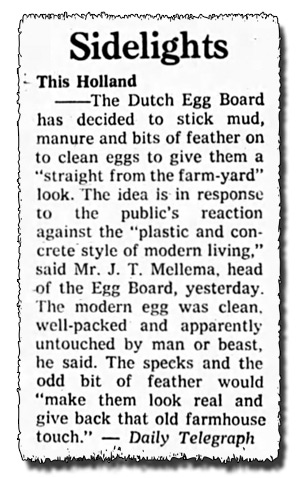 sound perfectly logical to me
Posted by ht  on  Thu Jul 07, 2016  at  12:52 PM
I worked at a roadside egg stall on a family farm where the manager was dishonest and did this. The sign on the stall said the eggs were organic and free-range, and I believe they were, but when the daily egg supply got sold out early she would have us sell dirtied-up Walmart eggs to avoid disappointing customers. (This was in 2013)
Posted by Colette  on  Sat Aug 20, 2016  at  07:08 AM
A mess hall chef for the U.S. Army shared his recipe for scrambled eggs. It involved 600 pounds of powdered scrambled eggs, a quantity of water, and a dozen eggs, shells and all. Every so often, a soldier would bite down on an eggshell and think, "Wow! Real eggs!"
Posted by Lyle  on  Wed Dec 07, 2016  at  03:04 PM
Commenting is not available in this channel entry.