Forrest Swan, a 22-year-old waiter and Auburn fan, says he got stiffed by a customer who was an Alabama fan. The customer also wrote a note on the receipt: "don't talk about being proud of Auburn to an Alabama Fan!" Naturally a photo was quickly snapped of the offending receipt and uploaded to twitter. [huffpost] 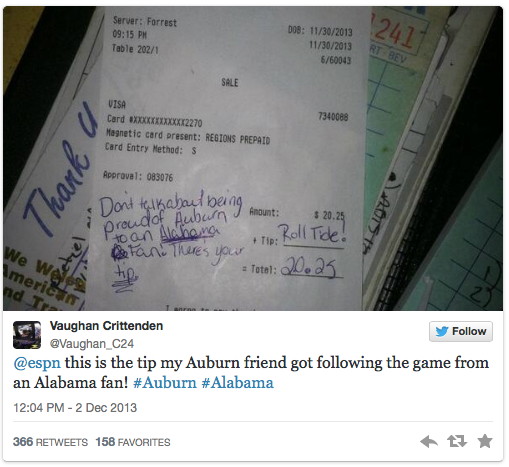 Mr. Swan hasn't revealed what restaurant this happened at. So details are impossible to verify. But I have a hunch that this case actually is real, unlike the other recent zero-tip-receipt cases that have been in the news.

Speaking of which, last Friday Gallop Asian Bistro announced it was suspending Dayna Morales, pending further investigation. She's the waitress who recently claimed a customer left a homophobic note (and no tip) on a receipt. So this makes it seem more likely that her story about the zero-tip receipt was indeed a hoax.