Another case of a note on a restaurant receipt

Dayna Morales, a server at the Gallop Asian Bistro in New Jersey, says that a couple she recently waited on not only didn't tip her, but also left a note on the receipt criticizing her lifestyle. So Morales took a photo of the receipt and uploaded it to the facebook page of the "Have A Gay Day" organization. 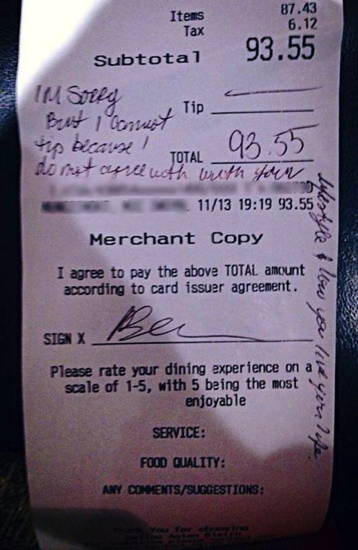 The photo attracted a lot of publicity and sympathetic supporters soon sent Morales almost $3000, which she says she's donating to charity.

But the twist in the story: a couple has contacted a local news station claiming they were the ones whom Morales served and a) they did tip her (almost 20%), and b) they didn't write any note on the receipt.

They have a customer copy of the receipt that matches the one Morales posted online, and their credit card statement shows they were charged the higher, tip-included amount — which lends credibility to their side of the story.

There seems to be a trend emerging here. It was a little over a month ago that doubts were cast on a very similar case in which a waitress at Red Lobster claimed a customer wrote a racist note on the receipt (and also didn't tip her).

What probably bothers me the most is that people rushed out to donate $3,000 when no one even knew the full story yet.
Posted by AqueousBoy  on  Wed Nov 27, 2013  at  06:15 AM
If you guys just paid restaurant staff a decent minimum wage, instead of a pittance plus whatever's left of the tip pot after the owner has looted it, none of this would happen.
Posted by Richard Bos  on  Thu Nov 28, 2013  at  07:07 AM
There seems to be a possible problem with the supposed couple's claim : the photo shows the MERCHANT COPY receipt, with the tipline slashmarked through. That makes it the closed copy, which would mean at the least, the signer failed to mark the tip. The common etiquette is to either write the amount if adding the tip to a card, writing "CASH" or writing that plus the amount of cash left.

I sense someone is lying here alright, but it may be the supposed couple.
Posted by S  on  Thu Nov 28, 2013  at  10:40 PM
S -- the assumption is that the waitress would have printed a second 'merchant copy' of the receipt, which apparently is fairly easy for servers to do.

But anyway, the waitress' case is fast coming apart. It seems that she has a long history of inventing stories: http://www.dailymail.co.uk/news/article-2513755/Family-left-gay-waitress-offensive-note-instead-tip-claim-hoax.html
Posted by The Curator  in  San Diego  on  Fri Nov 29, 2013  at  06:48 AM
Commenting is not available in this channel entry.