The Myth of the Poisonous Poinsettia

Millions of poinsettias are sold every year at Christmastime. But are these plants highly poisonous? For decades, many believed so. "One poinsettia leaf can kill a child," was a warning repeated often over the years. more… 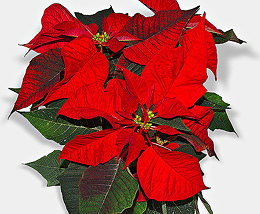 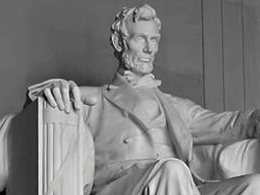 The Academy of Fine Arts in Bologna is hosting a 3-day festival that will celebrate and explore the human propensity to screw up. They're calling it Error Day. Festivities begin on Feb. 28 and continue until Mar. 2. 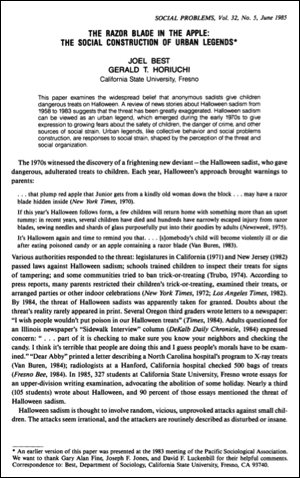 After doing an extensive review of newspaper databases for all cases between 1959 and 1984, he couldn't find a single instance of a child being killed by a Halloween treat, although there were a handful of cases (18) of minor injuries, and a larger number of reports of the discovery of contaminated treats without injury. Although he suspected that most if not all of these discovery reports were hoaxes.

So he concluded that the idea of "Halloween Sadism" was an urban legend that emerged into national prominence during the early 1970s because of fears about the safety of children:


The Halloween sadist has become an annual reminder of the fragility of the social bond — an expression of growing doubts about the safety of children, the trustworthiness of strangers, and the strength of the modern urban community.
In an article recently posted on the website of the University of Delaware (where he teaches) Best looks back on that article and notes that ever since its publication he's been the go-to guy for reporters writing about Halloween safety:


Every October since 1985, I've continued to get calls from reporters. Usually, it's a young person working for a newspaper who's been assigned to write a piece about Halloween safety. There's a pretty good chance that a reporter who goes online to review last year's stories about the topic will see me quoted, so I get called and re-interviewed.
Because of the ongoing interest in this mostly non-existent problem, Best has continued to scan newspapers for reports of Halloween injuries, and he says that "I still haven't found a documented case of a child who was seriously harmed by a contaminated treat."

Though he notes that this shouldn't be taken to mean that Halloween isn't a potentially dangerous holiday. It is. But for another reason altogether. On Halloween the risk of a child being struck by a car is four times higher than on other nights.

Syracuse-based artist Ty Marshal has created a replica of the Cardiff Giant, according to its original size specifications (ten-feet tall). His replica is going to be buried in Syracuse's Lipe Art Park and then unearthed on October 16, the anniversary of the date on which the Giant was first "found" on William Newell's farm back in 1869.

After being unearthed, Marshal's giant will remain on display in the park, under a tent, for one week. Visitors will be allowed to view it for 25 cents. Then, using a horse and cart, the Giant will be transported to the Atrium in Syracuse's City Hall Commons where it will be displayed until the end of October. Visitors will also be able to buy Cardiff Giant-themed merchandise: soap, chocolate, wine, and coffee. (As a long-time collector of hoax-themed merchandise, I HAVE to get all of that stuff!)

You can find more details about Marshal's project on his website: syracusecardiffgiant.com.

There's actually a long history of recreating the Cardiff Giant. Back in the 1870s quite a few showmen paid artists to recreate the Giant, which they then displayed, as a way to cash in on the popular interest in the phenomenon. The most famous of these replicas was displayed by P.T. Barnum in New York City, and (much to the annoyance of the owners of the real giant) attracted more visitors than the actual giant, which was simultaneously on display a few blocks away.

In 1976, a service club in Cardiff, New York created a "Mrs. Cardiff Giant", which they buried and then unearthed. You can see it (note the breasts) in the slightly blurry picture below.

Currently there are four Cardiff Giants on display (not counting Marshal's new one): at the Farmer's Museum in Cooperstown (this is the real giant), the Fort Museum in Fort Dodge, Marvin's Marvelous Mechanical Museum in Detroit, and the Circus Museum in Baraboo, Wisconsin.

Posted: Thu Sep 29, 2011.   Comments (2)
Cabbage Stump Night — Cabbage Stump Night (or merely Cabbage Night) appears to be an American variant of northern England's Mischief Night, celebrated on the night before Halloween. Once again, it's something I had never heard of before. From newburyportnews.com:


Cabbage Stump Nights are not well chronicled. New Jersey apparently had its "cabbage night'' when cabbages were hurled at houses, but ours bettered that because cabbages do not fit small hands for throwing...
Cabbages have a distinctive and proper root for Cabbage Stump Night because it is the rubbery equivalent of a Little League baseball bat — pliant, easy to grasp and packing a mighty wallop.
Proper celebration of Cabbage Stump Night was to make a stealthy advance upon a peaceful household, beat the bejabbers out of the side of the house or the front door and skedaddle as fast as you could in the getaway. The alternative to escape was to receive a belt in the behind from the householder.
There would be no damage to the house because of the softness of the root, but the racket inside the house was a shock wave.
There's a few more details about it in the Dictionary of American Regional English.

Posted: Fri Nov 06, 2009.   Comments (4)
Mischief Night — I'd never heard of Mischief Night before, but then it seems to be local to northern England. From the BBC:


Depending on where you live, it lands sometime around Halloween and Bonfire Night. And opinions vary on whether it is a chance for harmless fun or an excuse for anti-social behaviour.
Like many native traditions, its exact origins are unknown, but Mischief Night is thought to date from the 1700s when a custom of Lawless Hours or Days prevailed in Britain...
Since the 1950s, Mischief Night appears to have died out in all areas of the UK except northern England, and it is not at all clear why.
What is known is that it was exported to the United States, and recently re-imported as trick or treat, now popular across the UK.