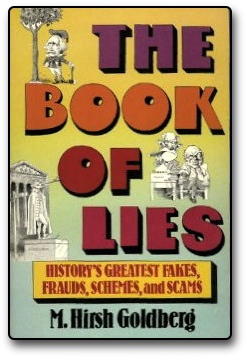 The day was created by M. Hirsh Goldberg, author of The Book of Lies

, back in the early 1990s. He chose to place it on the last day of April to serve as a counter-weight to April Fool's Day at the beginning of the month.

According to wikipedia, if someone asks you a question on National Honesty Day you're obligated to give them a truthful and straightforward answer. (Ironically, or perhaps purposefully, the wikipedia page contains some information, claiming the day is celebrated on April 29.)

Goldberg also uses this day to give the "Honest Abe Award" to an individual, group or company that has performed in an especially honorable way during the previous 12 months.

However, Dee Mueller, writing for the Guardian, points out:


"National Honesty Day is somewhat of a lie, itself. There are no congressional records or presidential proclamations for the day establishing it as a national day of observance. In other words, calling it a “national” day is untruthful in and of itself. Technically speaking, the day should simply be named Honesty Day."