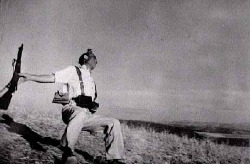 Robert Capa's photo of a soldier falling backward from the impact of a shot to his head, taken during the Spanish Civil War, has often been called the greatest war photograph of all time. Its full title is "Loyalist Militiaman at the Moment of Death, Cerro Muriano, September 5, 1936."

In 1975 Phillip Knightley created a controversy by alleging in his book, The First Casualty, that the photo had been staged. His source of information was fellow journalist O.D. Gallagher. Gallagher claimed he and Capa had shared a hotel room in 1936, during which time Capa confessed staging the photo. Other skeptics then argued that the falling soldier could be seen alive in a later frame on the same roll of film.

Subsequent research has vindicated Capa. For instance, there is no evidence Gallagher and Capa ever met before 1939, which casts doubt on Gallagher's claims. And careful analysis shows the second soldier in the later frame to be a different person.