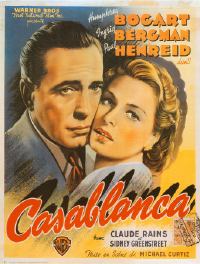 Too much dialogue, not enough exposition, weak story line Casablanca is arguably the most famous movie in the history of film. It won the Academy Award for Best Picture in 1943, and was voted as one of the top three American films ever made by the American Film Institute. It's a movie that everyone in the film industry should instantly be able to recognize. But in 1982 freelance writer Chuck Ross asked himself this question: Would contemporary Hollywood movie agents actually be able to recognize Casablanca if it was submitted to them as a script? Or failing that, would they at least be able to recognize it as great writing?

To find out, Ross devised an experiment. He retyped the script of Casablanca, changed its title to "Everybody Comes to Rick's" (the title of the original play by Murray Burnett and Joan Alison), changed the name of Rick's sidekick from Sam to Dooley (after Dooley Wilson, the actor who played that character), and submitted it to 217 agencies as a script supposedly by an unknown writer, "Erik Demos."


Results of the Casablanca Experiment
Of the 217 agencies Ross sent the script of Casablanca to, ninety returned it unread. They did so for various reasons — it was their policy not to read unsolicited manuscripts, they weren't taking on new clients, or they were no longer in the agency business. Seven never responded. Eighteen scripts apparently got lost in the mail.

Thirty-three agencies actually recognized the script. For instance, Alan Green of the Gage Group wrote back to Ross, "Unfortunately I've seen this picture before: 147 times to be exact."

Eight noticed a similarity to Casablanca, but didn't realize it was Casablanca.

However, thirty-eight agencies claimed to have read it, but rejected it. In other words, of those agencies that actually read the manuscript (or claimed to have), the majority did not recogize it as Casablanca, nor did they think the script was good enough to be worth representing.


"I just think you need to rework it... you have excessive dialogue at times."

"Too much dialogue, not enough exposition, the story line was weak, and in general didn't hold my interest."

"Story line is thin. Too much dialogue for amount of action. Not enough highs and lows in the script."

"I strongly recommend that you leaf through a book called Screenplay by Syd Field, especially the section pertaining to dialogue. This book may be an aid to you in putting a professional polish on your script, which I feel is its strongest need."
Perhaps strangest of all, three agencies expressed a desire to represent the work. A representative of the Lil Cumber Attractions Agency asked Ross who he might have in mind to play the character of Rick. The following conversation ensued:


Ross: "Humphrey Bogart."
Lil Cumber Rep: "I meant somebody available now."
Ross: "Somebody like Bogart..."
Finally, the Irv Schecter Co., after not replying for six months, contacted Ross to ask permission to send the script to a literary agent to see about the possibility of turning it into a novel.

Ross's experiment led him to conclude that many movie agents have difficulty recognizing both well-known screenplays and quality writing, and also that submissions by unknown writers stand little chance of getting published.


Chuck Ross
Ross's Casablanca experiment was the second time he had perpetrated such a hoax. In 1979 he had submitted the text of Jerzy Kosinski's National Book Award winning novel Steps to fourteen publishers, all of whom rejected it.

Ross never made it as a screenwriter, but he did achieve success as a journalist. As of 2007, he was publisher and editorial director of TelevisionWeek magazine, a leading trade publication for the TV industry.
Links and References
Literary Hoaxes Rejected Classics Movies Hoaxes of the 1980s
Tweet