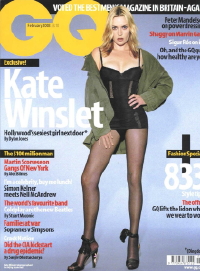 Photo editors at British GQ digitally massaged Kate Winslet's legs to make her appear taller and skinnier in the cover photo than she really was. They did so despite the fact that in her interview inside the magazine Winslet boasted about being more rounded, saying that all the men she knew "like girls to have an arse on them."

Winslet later claimed the photo editors reduced her legs by a third of their size. "I was pretty proud of how my legs actually looked in the real picture," she was quoted as saying. "I have Polaroids from the shoot and I thought I looked fine." Editor-in-chief Dylan Baker acknowledged the alteration, but claimed it had been done with Winslet's approval. Winslet said, "It just was important to me to let people know that digital retouching happens all the time. It's probably happened to just about every other well-known actress on the face of the planet."
Links and References
Retouching is excessive says slimline covergirl Kate Winslet. (Jan 10 2003). Hello Magazine.
Photo Categories: Resizing Details, Celebrities, Digital Plastic Surgery, Magazine Covers, Striking a Pose, 2000-2004
Tweet