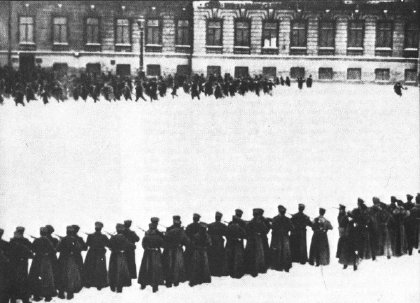 On January 22, 1905 (January 9 in the Old Style calendar) workers in St. Petersburg marched toward the Winter Palace intending to hand a petition to Tsar Nicholas II. Soldiers stopped them at the Narva Gate and opened fire. In Russia the day came to be known as Bloody Sunday. The event exposed the brutality of the Russian police and undermined popular support for the Tsarist regime.

In 1925 director Vyacheslav Viskovsky made a propaganda film about Bloody Sunday titled Devyatoe Yanvarya (January 9). The film included a reenactment of the soldiers firing on the crowd. This image shows the reenactment. (It is not clear whether it is a retouched still from the film itself, or a photograph that was taken during the filming.)

The image was more dramatic than any existing photographs of the Bloody Sunday massacre, and was soon distributed by the Soviet Tass News agency, which described it as an actual photograph of the 1905 event. Later it appeared in numerous Soviet textbooks, again presented as a photograph of the event itself, not as a staged reenactment.
Links and References
• Alain Jaubert. (1989). Making People Disappear: An amazing chronicle of photographic deception.
Photo Categories: Staged Scene, Military, War, Politics, 1920-1939
Tweet