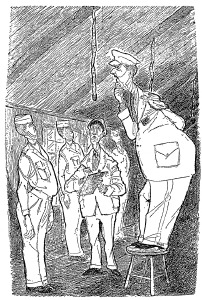 During World War II, the illustrator Hugh Troy was given a desk job stateside. He found it excruciatingly boring. So to amuse himself he began preparing Daily Flypaper Reports in the style of standard army regulations. These were counts, printed on official-looking paper, of all the flies trapped on flypaper in the mess hall during the last twenty-four hours. He analyzed the results according to wind direction, nearness to windows, nearness to the kitchen, length of the flypaper, etc. He then would mimeograph the report and slip it in among the other official forms submitted to headquarters each day.

After keeping this up for a month, he received a call from an officer in another comapny: "Lieutenant, Can you tell me the proper procedure for filing fly reports? We've been catching hell from the Pentagon for not sending them in."
Links and References
Military Hoaxes of the 1940s Hugh Troy
Tweet