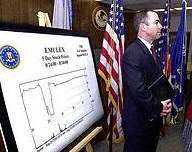 A US Attorney announces the arrest of Mark Jakob
Disturbing headlines greeted the shareholders of Emulex Corp. on the morning of August 25, 2000: "Emulex Announces Revised Earnings; SEC Launches Investigation Into Accounting Practices. Paul Folino Steps Down As CEO."

Emulex shareholders were despondent. But then more news hit the wires: Earnings weren't being restated. The CEO had no intention of leaving. The SEC was conducting no investigation of accounting irregularities. The entire scenario of corporate meltdown spelled out in the earlier press release had been a hoax.

It turned out that the bogus news release had originated from a relatively new wire service called Internet Wire. The management of Internet Wire explained they had been duped by a "sophisticated" group of con-artists who, posing as a public relations firm representing Emulex, had sent the announcement to their night staffers. Believing the announcement to be real, the night staffers failed to fact check it thoroughly and included it in with the other morning press releases.

Once the announcement appeared on the internet, the other, bigger wire services, such as Bloomberg and Business Wire, had quickly picked it up and disseminated it even more widely. Apparently some staffers at these other wire services did try to verify the story, but on account of the time difference between the coasts they were unable to reach the California employees of Emulex. This gave the fake release over two hours to wreak its damage before discovery.

The following Thursday, August 31, the FBI announced an arrest in the Emulex case. The lone perpetrator was Mark Jakob. Contrary to the image of a sophisticated group of con-artists conjured up by the management of Internet Wire, Jakob was actually a 23 year-old college student who had once been an employee at Internet Wire. He reportedly made $250,000 from his scheme, although he only had one week in which to enjoy the money.

Many journalists speculated that the Emulex hoax represented a new wave of internet-related crime. However, the case bore the strongest resemblance not to any recent crimes, but to an instance of financial fraud from 1864, the Civil War Gold Hoax.
Financial Scams Stockmarket Hoaxes of the 21st Century
Tweet

The article fails to mention that EMLX's stock was reopened for trading several hours after the halt at $43. The first prints were in the vicinity of $113.

This means that anyone who was short through the halt most likely lost money.

Emulex soon took steps to have its stock listed on the NYSE, where the specialist system prevents markets from nosediving as EMLX did that day. The new ticker is ELX.

The episode is a warning about the potential for significant disruption where markets are entirely electronic.