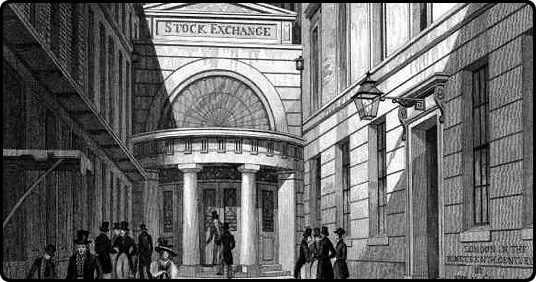 In 1814, a man wearing a British military uniform rowed up to a dock on the coast of the English Channel and told the guards there that Napoleon had been killed. Immediately riders were sent to London. When traders on the London stock exchange heard the news they celebrated by bidding up the price of stocks. But soon the truth: the war against Napoleon was still raging. They had been tricked. Immediately the market dropped again. But in the meantime, someone had profited handsomely from the temporary rise. The finger of blame was pointed at a popular military hero, Lord Thomas Cochrane, who was thrown into prison. More… 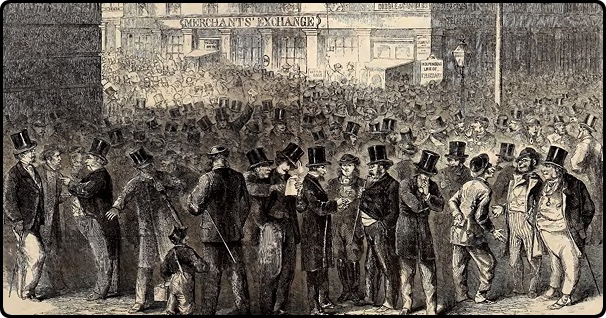 An attempt at stockmarket manipulation. Several New York papers were tricked into printing bad news about the Civil War. In response, investors dumped stocks and bought gold, perceived as a safer investment. But the bad news had been planted by a newspaper insider who had previously invested heavily in gold, hoping to profit from the anticipated rise in its price. He was tracked down and arrested within 3 days. More… 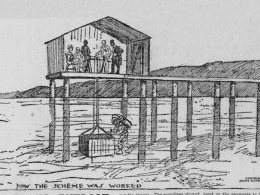 Prescott Jernegan claimed he had found a way to cheaply extract gold from sea water. His "Gold Accumulator" consisted of a wooden box, inside of which was a pan of mercury mixed with a secret ingredient. A wire connected the mercury to a small battery. When lowered into the ocean, this contraption supposedly sucked gold out of the water.

A test conducted in Narragansett Bay in February 1897 proved the gold accumulator worked. After a few hours the box was raised, full of gold flakes.

Soon Jernegan had found investors who helped him found the Electrolytic Marine Salts Company. When the company offered stock, the share price rapidly rose from $33 to $150. But to the dismay of investors, the apparent success of the gold accumulator was entirely due to the diving skills of Jernegan's accomplice, Charles Fisher. Fisher would swim underwater in a diving suit and salt the mercury with gold. 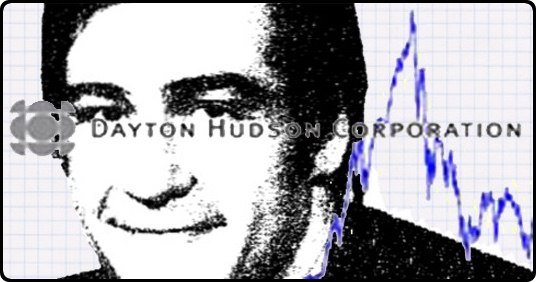 The news that a private investment firm was buying the retailer Dayton Hudson for $6.8 billion sent the company's stock price soaring, and then crashing back down again when investors learned the report was false. The source of the news was a 46-year-old investment adviser, P. David Herrlinger, who had phoned the Dow Jones News Service and told them he was buying the company. The news service had taken his word for it, but Herrlinger, it turned out, was suffering a nervous breakdown and was delusional, which sparked concern at how easily a single irrational individual had manipulated the market. More… 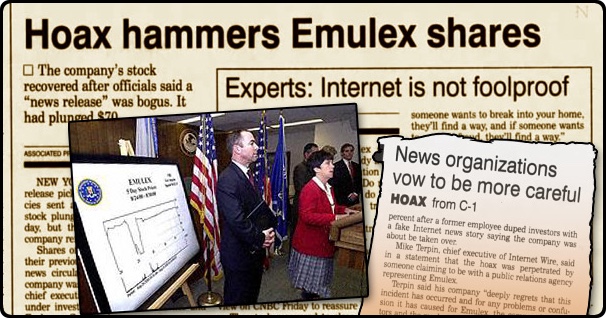 The share price of Emulex Corp. plummeted after news went out over wire services stating that its accounting practices were being reviewed by the SEC and that its CEO was resigning. However, none of this was true. The bad news had been invented by a college student, Mark Jakob, who had figured out that he could get a wire service to distribute a fake story if he submitted the story to the service at night, since night staffers were less likely to fact-check press releases. Jakob had hoped to profit by manipulating Emulex's stock price, and he did initially make $250,000. But the FBI arrested him within a week, so he didn't have long to enjoy the money. More…
View More Categories of Hoaxes