October 7, 1959: The city council election in Sao Paulo, Brazil had a surprise winner — Cacareco, a five-year-old female rhinoceros at the local zoo. Not only did she win, but she did so by a landslide, garnering 100,000 votes (15% of the total). This was one of the highest totals for a local candidate in Brazil's history to that date. 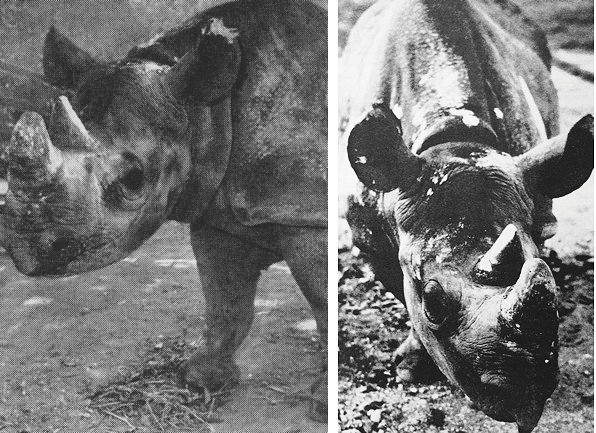 Cacareco's candidacy was traced back to a group of students who had printed up 200,000 ballots with her name on them, but the ballots were all legitimately cast by voters, one of whom commented: "Better to elect a rhino than an ass."

Cacareco's election caused an outpouring of concern among Brazil's intellectual classes. One sociologist described it as "a phenomenon of the greatest sociological importance" and worried that it indicated Brazil was on the threshold of revolt. Others interpreted it as a protest against food shortages, the high cost of living, and political corruption. In fact, many voters in the same election had expressed their disgust with local politics by placing black beans in the ballot envelope instead of a ballot.

The director of the zoo commented that he would ask Sao Paulo to pay Cacareco's Councilman's salary. However, election officials nullified all her ballots and a new election was held the next week. 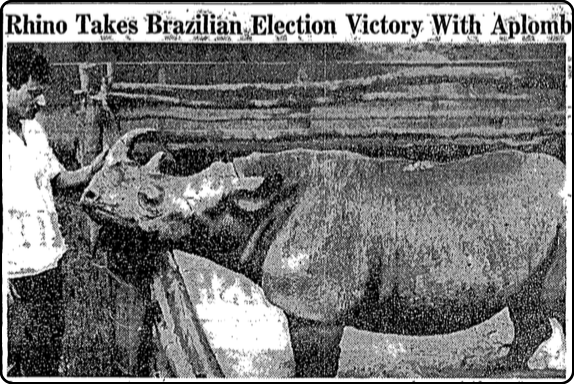 Cacareco learns of her victory

Cacareco died in 1962, but her memory lived on in a number of ways. "Voto Cacareco" became a widely used term signifying a protest vote. She also inspired the formation of the Rhinoceros Party of Canada, whose members appointed the rhinoceros Cornelius the First as their leader.

Cacareco wasn't the first animal elected to political office, not even in Brazil. In 1954 a goat named Smelly had been elected to the city council in Jaboatao. But due to the size of her victory, Cacareco remains the most famous animal candidate of all time.
Links and References
Animals Political Satirical Candidates Hoaxes of the 1950s Student Pranks
Tweet