On the morning of April 1, 1978, a barge appeared in Sydney Harbor towing a giant iceberg. Sydneysiders (as residents of Sydney are known) were expecting it. Dick Smith, a local adventurer and millionaire businessman (owner of Dick Smith Foods and Dick Smith Electronics), had been loudly promoting his scheme to tow an iceberg from Antarctica for quite some time. Now he had apparently succeeded. 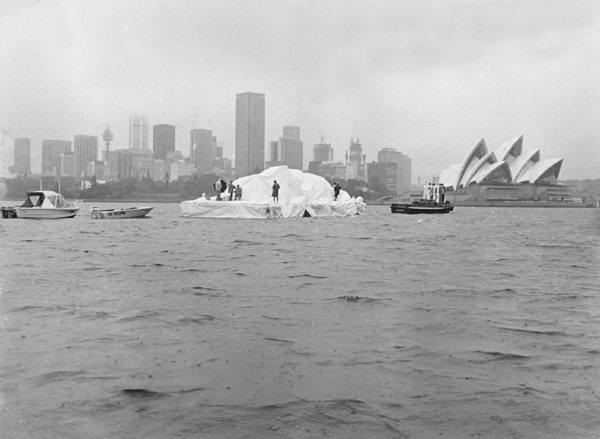 Smith said that he was going to moor the iceberg near the Sydney Opera House and then carve the berg into small ice cubes, which he would sell to the public for ten cents each. These well-traveled cubes, fresh from the pure waters of Antarctica, were promised to improve the flavor of any drink they cooled. The cubes would be marketed under the brand name 'Dicksicles.'

As soon as the iceberg entered the harbor, phone calls started pouring into radio stations and newspapers, with people asking, "What's that in the harbor? It looks like an iceberg." Ferry skippers politely gave way for the slow-moving curiosity — christened the Dickenberg 1.

Excitedly the entire city waited to catch a glimpse of the floating mountain of ice. People gathered along the shore to see it. Boaters who traveled out to meet the berg were given complimentary cubes.

Then it began to rain. 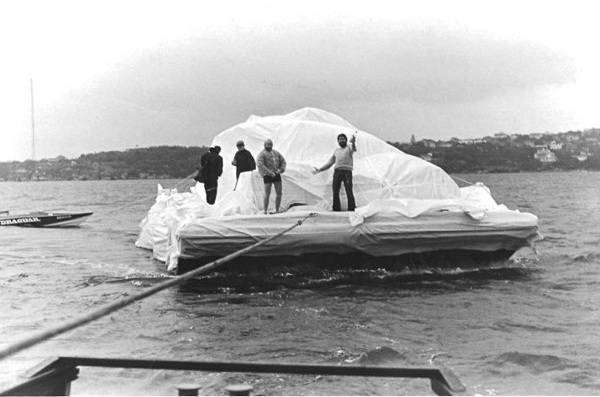 View of the "iceberg" from the barge
The water washed away the firefighting foam and shaving cream that the iceberg was really made of, exposing the white plastic sheets beneath. In this degraded condition the Sydney Iceberg sailed proudly on, floating past the opera house and city skyline. Boaters who now joined the procession were still given free cubes... though the cubes actually came from the onboard beer refrigerator.


Pulling off the Prank
Dick Smith really did have a dream of towing an iceberg from Antarctica to Australia. He thought it would be a great way to provide fresh water for cities such as Adelaide. But most people told him it was a crazy idea. So one of his staff members suggested, "Why not just fake one for April Fool's Day?" 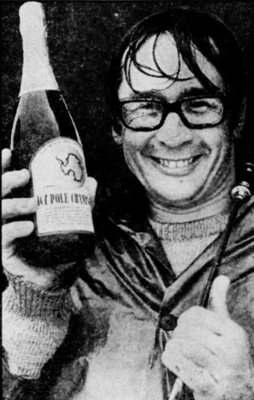 Dick Smith celebrates with some champagne
In mid-March, he anchored a barge at Balmain wharf, outside Sydney Harbor. Then, on the morning of the 1st, at 3 am, Smith and his collaborators (including Gary Johnston, Gerry O'Nolan, and Hans Tholstrup) began transforming the barge into an iceberg. This involved plastic sheets, several dozen cans of shaving cream, and lots of fire-fighting foam. Two hours later, they began towing the berg toward the harbor.

As dawn broke, Smith seeded the excitement by having 300 of his employees call up radio stations and newspapers, claiming to have spotted the iceberg in the harbor.

Aiding the deception was the weather, which was grey and gloomy, so that from the shore the floating mound of foam really did look like an iceberg. Until it rained. 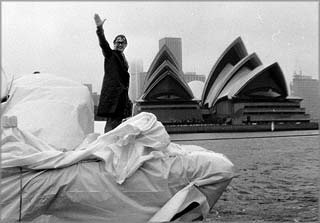 Smith estimated that the entire stunt cost him $1450, which he felt was cheap for the amount of publicity it generated.

Smith later told the press that he still did want to tow an iceberg up from Antarctica for real: "I'm still genuine about that and will be doing it soon, but so many people doubt me, I thought I would fool them. I just do these things for kicks. It takes the boredom out of everyday work."


The Second Sydney Iceberg
In March 2010, a second iceberg (or, at least, a giant ice-cube) was towed into Sydney Harbor. Once again, it was fake. But it wasn't an April Fool's Day prank. This time it was a stunt to celebrate World Water Day and show how much water an average Australian household could save each year by installing water-saving devices. 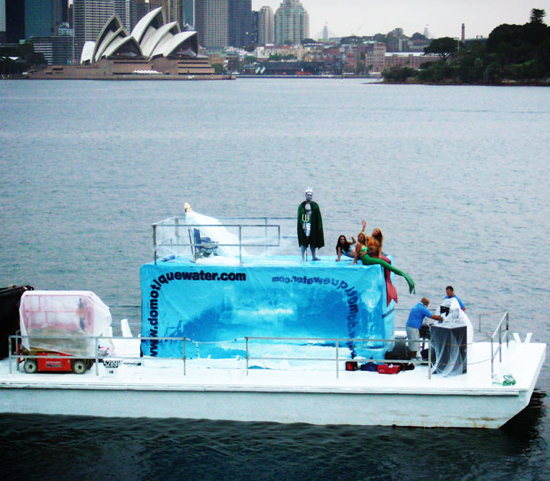 Actually, Dick Smith only just started up his food business in the last 5 years or so. He made his millions from his 'Dick Smiths Electronics' stores.
Posted by Lindsay  on  Thu Apr 01, 2004  at  10:01 PM
was that supposed to be a scam to make money off of regular ice or a joke? either way its a damn good idea
Posted by Brian  on  Sun Apr 04, 2004  at  03:09 PM
I read, and NOT on 1/4, that an artist is planning to drag an ice berg from the Arctic to Ireland.
Posted by Spam  on  Thu Mar 31, 2005  at  08:25 PM
This was a joke, not a scam. I remember the radio coverage this got. Dick was already high profile, but this got him heaps o' media coverage...
Posted by Chriz  on  Thu Mar 31, 2005  at  10:11 PM
Dick Smith is really quite well known for his April fools stunts - one year while the sydney harbour tunnel was being built by towing into the harbour huge cross sections of the tunnel. These were sunk and joined together to form the tunnel on the harbour bed.
He announced that it wasn't a tunnel after all but a road, that they floated during peak hour and sank during the rest of the day - the conversations around the office that day was around what an engineering feat this was..... lol
Posted by Geoff  on  Sun Jul 03, 2005  at  11:03 PM
Wouldn't it be impossible to drag an iceberg from antarctica to sydney? firstly the berg would melt due to the warmer climate and water, and also, how does one tie an iceberg securely to a boat?
Posted by Who Cares Anyway  on  Mon Jan 16, 2006  at  03:11 AM
A similar stunt by Dick Smith was when he announced he would take a 'jumbo' under the Sydney Habour Bridge. He implied, and everyone believed,he meant a jumbo jet, a 747 airplane. On the appointed day, crowds on the shore watched a barge being towed under the bridge, on which was an elephant.
Posted by BalmainBoy  on  Sun Apr 02, 2006  at  06:26 AM
The idea itself is not so strange. In Newfoundland Canada, Iceberg Vodka is made by melting icebergs and combining the water with grain alcohol made from Canadian wheat. The water is almost as pure as distilled. In late spring and early summer, the bergs float south past Newfoundland naturally on the current, so most of the transportation from the arctic is done by nature. They go out in a boat, tow one (or a piece of one) in and melt it. The vodka is considered one of the best, although hard to find.
Posted by John S  on  Fri Apr 07, 2006  at  07:50 AM
ROTF LMAO this should be the number one april fools of all times!!!
Posted by hahaha  on  Tue Jun 27, 2006  at  08:17 PM
Well the way Australia's drought is going at the moment (the worst in over 100 years).

As silly as it sounds this idea might be worth trying at least.

The world needs more Dicks.
Posted by Neil  on  Tue Mar 06, 2007  at  01:26 AM
Met Dick once~ he was really proud about this iceberg joke. and it was a joke, not a scam to make money~ At that time he was already very weathly, but of course it did give him more wealth~
He said $$ comes from fame and hard work .. topped with good ideas. He has already put in his fair share of hard work, his mind is bursting with new ideas, he just needs the publicity for it~
Posted by Taco  on  Sun Mar 18, 2007  at  06:49 PM
You have most of the story right. As Dick would tell you, it was conceived by myself in the Stoned Crow bar in Crows Nest on Tuesday 24 January 1978, paid for by Dick Smith and put together by me, Hans Tholstrup (another famous adventurer)and his mate Olly. We built the "iceberg" in Sydney Harbour on the morning of April 1st, 1978 on the way from Snail Bay (inner harbour)to the Eastern Channel (Wedding Cake) mark off Watsons Bay. A heavy rain squall hit us at 0400 just off the Opera House and we nearly lost the sheet of plastic of 2000 square feet in the wind. The firefighting foam was meant to represent snow which had accumulated on the ice but it was a disaster, not only because it washed off straight away but because it STANK!

Part of the success of the joke was the build up to it for about 12 months. Everytime Dick wanted some publicity he got me to run a press release about towing an iceberg. I did some serious research to back up our story and spent a day in Melbourne on the Nella Dan, Australia's Antarctic supply vessel at the time. I initially thought of playing a joke on Dick but figured I didn't need to spend $3000 for a laugh so I told him.

It was an amazing experience being towed slowly up the harbour in pouring rain with tens of thousands of people flocking to the foreshores and scores of boats coming out to us to "get some ice", which we had thoughtfully provided in an Esky so we could toss them a souvenir "Dicksicle".

You might like a better picture: http://www.no-big-bang.com/iceberg.html
Posted by Gerry Nolan  on  Sat Mar 31, 2007  at  02:04 AM
Your memory plays you tricks BalmainBoy. The "Jumbo under the Harbour Bridge" con was perpetrated not by Dick Smith but by colourful breakfast rado DJ Ian McCrae.
Posted by Baxter de Wahl  on  Sun Apr 01, 2007  at  11:02 PM
That's correct Baxter. I remember saying to Dick, "If they don't tow an elephant on a barge under the Bridge, let's do it!