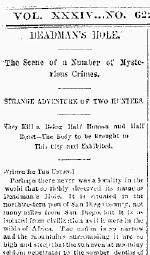 The San Diego Union reported that two hunters had killed a bizarre, half-human half-animal beast in an out-of-the-way location called Deadman's Hole northwest of San Diego. The creature, it was said, was responsible for a string of gruesome murders.

The creature was said to have the body of a bear, but it stood upright like a man and had a human face. The Union provided a graphic account of its death: "Cox, who is a wonderful shot with a rifle, brought his weapon to his shoulder and fired. With a cry like that of a human being the beast instantly fell in a hideous heap across a boulder that it was in the act of scaling." Then the hunters discovered the creature's lair where the bones of its human victims lay piled in a heap.

The article theorized that the animal was the result of a cross between a man and some kind of carnivorous beast. It said that the hunters planned to bring the body to San Diego for public exhibit within a few days.