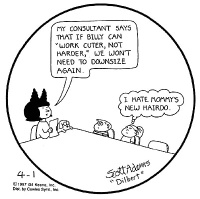 Comic strip fans opened their papers on April 1, 1997 and discovered their favorite strips looked different. Not only that, but in many cases characters popped up in other strips out of place. The reason for the chaos was the Great Comics Switcheroonie. Forty-six comic-strip artists conspired to pen each other's strips for the day. For instance, Scott Adams of Dilbert took over Family Circus by Bil Keane, where he added his brand of corporate satire to the family-themed strip by having the mother tell her kid to "work cuter, not harder." Garfield and his owner visited the world of Blondie, where Garfield promptly ate one of Dagwood's sandwiches. And the character Nancy popped up in the Foxtrot comic strip wearing a Darth Vader outfit.

The stunt was masterminded by Rick Kirkman and Jerry Scott, creators of the Baby Blues comic strip. When asked why he participated, Scott Adams noted, "You don't get that many chances to tunnel under the fence."