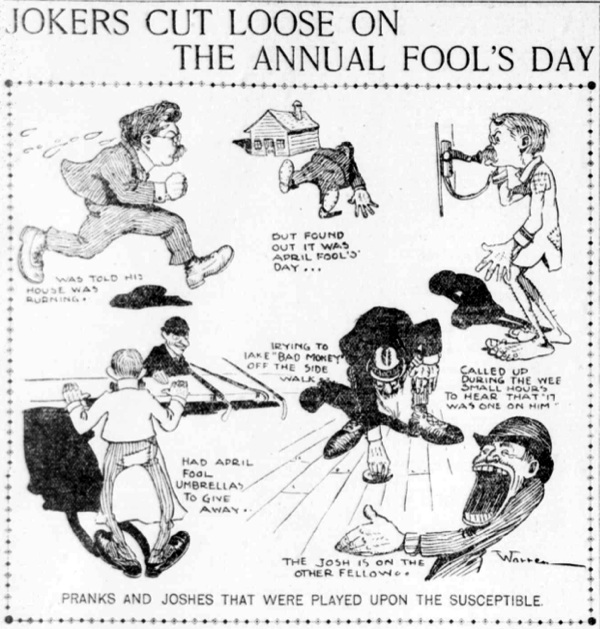 
The morgue was a favorite point of attack and Deputies P.H. Flynn and P.I. McCormick worked their "telephone ears" all day answering fake calls for the dead that never die. One facetious and public-spirited citizen reported a purely psychical suicide and murder at the Cliff House. Another, who was told to ring up Main 1947 — the morgue telephone number — and when he gave his name and asked what was wanted of him received the reply that all fools would be given choice slabs if properly presented and 'on the dead.'

'Billy' Roeder, famous as a mixer of any old kind of a drink, racked his brain for two days concocting a new wrinkle. He gave an order for a dozen fake umbrellas, nothing but pieces of wood that bore the specious outward look of swell leather-covered rain protectors. From time to time during the day patrons of his saloon would bump against one of these umbrellas hanging on the railing before the bar. Then the friendly barkeeper would approach, whisper diabolical suggestions in their ears and in a moment patron and umbrella would leave the saloon together. Of course, the sink of taking an umbrella that another left was sport pure and unadulterated. But these umbrellas did not open. Roeder timed his joke well, for the rain came along very conveniently.
April Fool's Day Cartoons April Fool's Day Hoaxes by Freelance Pranksters April Fool's Day, 1900 The April Fool's Day Morgue Prank
Tweet