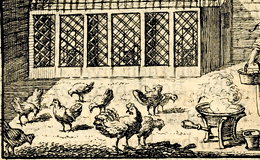 There are two different stories describing the first April Fool's Day hoax by a newspaper, but both stories claim it was a German paper.

The first story claims that in 1789 a Berlin newspaper reported that hailstone the size of pigeon eggs had fallen on the streets of Potsdam, which caused a mass migration of curiosity seekers hoping to see this unusual weather phenomenon. Though, of course, no hailstones were seen.

The second story claims that in 1774 a German paper claimed that it was possible to change the color of the eggs a chicken laid simply by painting the area in which the chicken lived.