The International Business Times reports that a "fake image" purporting to show the "world's largest tortoise" being transported on a flatbed truck has recently been circulating online. 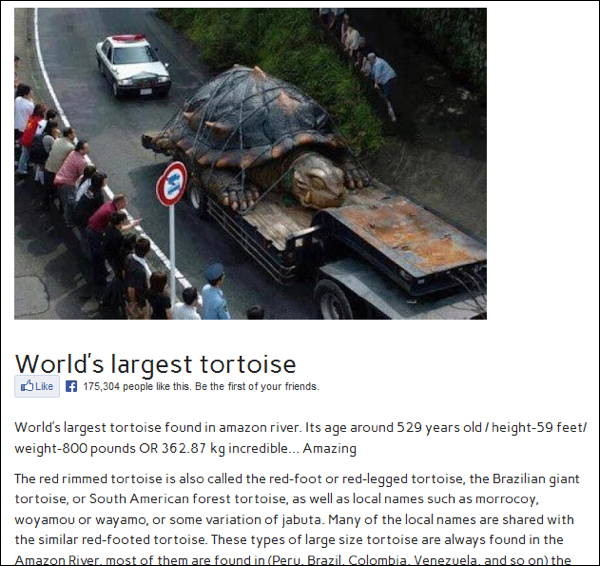 I think it's been circulating for at least half a year, but it's not correct to call it a fake image. It's a still from Gamera The Brave (a 2006 Japanese monster movie) that has been falsely captioned. Here's another picture of the "world's largest tortoise" in action: 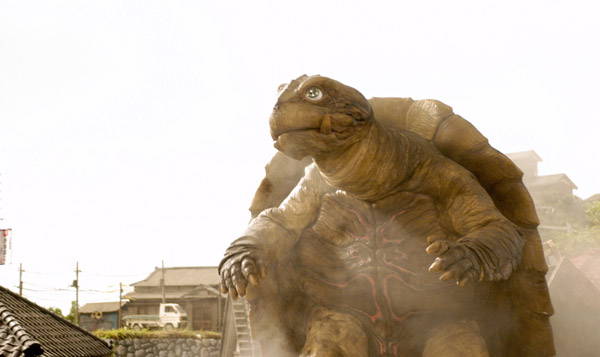 The question that popped into my head is whether the creature in the image is a tortoise or a turtle. The distinction between the two has always been a bit hazy in my mind.

According to diffen.com, tortoises live on land while turtles live in the water. But wikipedia notes that in North America it's common to use 'turtle' as a generic term for all reptiles of the chelonian order (i.e. turtles and tortoises get lumped together).

Gamera is commonly referred to as both a turtle and a tortoise. But since he walks on his back legs, flies, and breathes fire, it doesn't really seem important to get fussy about what kind of reptile he's classified as.

Tortoises have legs, turtles have flippers (benerally, although terrapins have more conventional legs). The former live on land, the latter in the water. That is the simple rule of thumb which applies to British English, but American's place both types under the turtle category.
Posted by Mr R  on  Wed Nov 27, 2013  at  12:29 AM
Commenting is not available in this channel entry.