Wikipedia defines a sock puppet as "an online identity used for purposes of deception." And it looks like the fast food restaurant chain Chick-fil-A just got caught red-handed using one.

The sock puppet in question was one "Abby Farle" — whose Facebook profile picture showed her to be a teenage girl. But there were some odd things about Abby. For a start, her Facebook account was only created a day ago, and during her brief time on Facebook her sole activity appeared to be defending Chick-fil-A, vigorously supporting the company's claim that it stopped including toys from the Jim Henson Company in its kids meals because it concluded the toys were dangerous (not that the Henson Company pulled its toys in reaction to anti-gay comments by Chick-fil-A's COO, as has been widely assumed).

Then someone pointed out that Abby's profile picture actually came from the stockphoto company Shutterstock. Soon after that, her account disappeared.

Chick-fil-A insists it wasn't responsible for the Abby Farle account, and that might be true. Abby could easily have been the creation of someone in the company, or associated with it, acting alone. 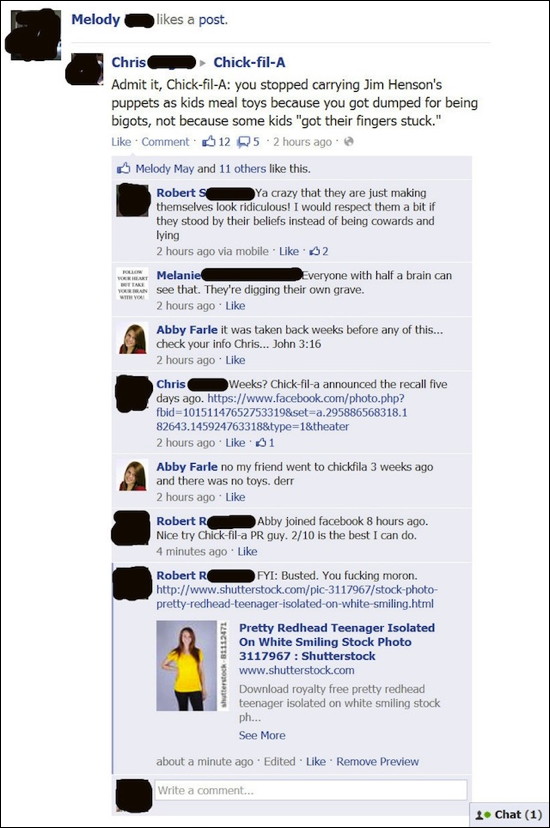 Pretty damning evidence, if you ask me.

Mind, CFA has ample amounts of plausible deniability, but the current fiasco is quickly becoming a huge mess. If they just shrugged, ignored everything, and kept on making chicken sandwiches, it would blow over in a few weeks. But no, they have to get the last word in. They have to prove that they are 'right'.

Meh. Honestly? There's none within 25 miles of here, and I can't stand their food anyway.
Posted by Robin Bobcat  in  Californian Wierdo  on  Wed Jul 25, 2012  at  02:41 PM
"Abby could easily have been the creation of someone in the company, or associated with it, acting alone"