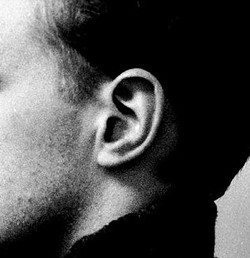 image source: megafon
A study reported in the journal Laterality (Mar 2005) found that people are significantly better at detecting lies with their left ear than their right ear. The reason is that left-ear information is processed by the brain's right hemisphere, which apparently is better at detecting deception than the left hemisphere. (For instance, studies have shown that people with right-hemisphere damage have trouble detecting lies.)

In the ear study, 32 participants listened to 112 pre-recorded statements, using either their right or left ear, and then were asked to determine which statements were true or false. The results, from the study:


Participants were significantly more accurate when statements were played through the left ear (M = 61.33%, SE = 1.26) than the right ear (M = 56.41%, SE = 1.09). These data suggested a general right hemisphere advantage in deception detection...
We also examined the possibility that certain participants were over-responding. For example, if a participant gave all true responses, s/he would be correct for all the true statements and incorrect for all the false statements. To test this possibility, we examined individual participant responses. Two participants were identified as "over-responders" using an outlier analysis (Tabachnick & Fidell, 2001, p. 67). One of them provided significantly more "yes" responses and the other significantly more "no" responses (ps < .05). When the data were re-analysed, similar results were obtained. There was a significant main effect for Ear (p < .007) and Truth/Lie (p < .001), but no significant interactions. Therefore, the results were likely not a result of response bias...
In conclusion, there was a left ear advantage when detecting statement veracity. Participants were significantly more accurate in determining the truthfulness of a statement when hearing it through the left ear. These data support the hypothesis that the right hemisphere is involved in detecting deceit. Further, they extend the literature on the possibility of using ear advantage as a gauge of hemispheric involvement.
I'm not sure if this has any practical applications. Although I wonder if poker players might gain an advantage if they put an ear plug in their right ear, forcing themselves to listen to other players with their left ear.

On the phone I only use my left ear. Just sounds better.
But that was already obvious to me due to the left/right crossing going on.

Posted by Unfairly Balanced  in  Earth  on  Tue Aug 07, 2012  at  08:58 AM
Even these scales tell the truth in math but not in practice. There is only a 5% increase in the ability to detect lies from the left ear. This is significant in the scientific community, however, it lacks practical application since 5% is not much difference in daily life.
Posted by Nadine  on  Fri Dec 21, 2012  at  01:38 AM
It's even worse than that. The study involved only 32 participants, and only 112 statements. With those kind of numbers, a 5% different has a significance, even purely academically, of Sweet Fanny Adams. This isn't a hoax, this isn't a curious new finding, this is just junk science. Nobody who knows jack about statistics can take this seriously.
But rest assured, someone, somewhere, is getting a grant out of this, and a nice set of citations in "the scientific press". Bunkum, pure bunkum, and one more prime example of what's wrong with the current citomania.
Posted by Richard Bos  on  Sat Jun 15, 2013  at  07:32 AM
This is trash science. Taking the numbers of the paper with a very simple Z test these are the results:

There is not a significant difference in the proportions of individuals with the characteristic of interest within the two groups (P = 0.884)

So, no actual difference exist.