The Owlman of Mawnan

This Is Cornwall has a brief article about the "Owlman of Mawnan." They write:


The first sighting occurred in April of that year. Don Melling, who was holidaying in the area, said that on April 17 his young daughters, June and Vicky, were walking through woods near Mawnan church when they saw a "half-man half-owl" hovering above the church.
The incident is suspected to be a hoax because Tony "Doc" Shiels became involved. He was the first person Melling told about the sighting, and then became the source for various illustrations of the Owlman. Shiels already has a place in the Hoax Museum because he was the source of the "Loch Ness Muppet" image. So his credibility is pretty low. 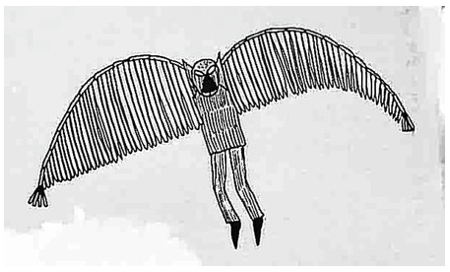