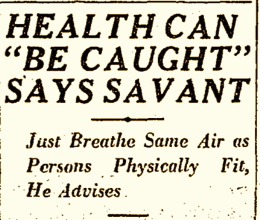 A case of satirical prophecy? On April 1, 1931, the Los Angeles Times ran an article on its front page declaring that health can "be caught." It explained that a German scientist, Dr. Eugene Lirpa, had discovered that good health was caused by a bacteria, "Bacillus sanitatis." People who lacked this bacteria grew ill. Therefore, it would be possible to make people healthy by infecting them with the "germ of health."

The article was an April Fool's Day hoax. In fact, I think it's the ONLY April Fool hoax the LA Times has ever perpetrated, because the major US newspapers (unlike their British counterparts) tend to view themselves as being somewhat above the vulgar tradition of April Foolery.

But fast forward to the present day. Researchers at Washington University School of Medicine recently published an article in Science suggesting that people who are of a healthy weight might be infected by a bacteria called Bacteroides. Obese people lack this bacteria. Therefore, infecting overweight people with this bug might help them lose the pounds.

Sounds to me a lot like the LA Times 1931 article. April Fool's Day once again anticipates reality.

The claim follows a series of experiments which found that the different populations of bacteria that live in lean and overweight people caused mice to lose or gain weight.