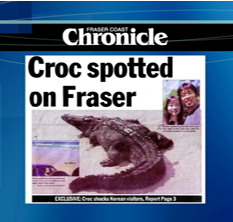 The Telegraph recently listed the beach on Queensland's Fraser Island as among the most dangerous in the world. The reasons: sharks, jellyfish, strong rip currents, deadly spiders, the odd saltwater crocodile, and dingoes. But people around Fraser Island disagree. They don't dispute the presence of the sharks, jellyfish, rip currents, spiders, and dingoes. (Though they don't think dingoes are dangerous). But they do insist there are no crocodiles there, except for one — which is fake.

One of the locals owns a fake, but realistic-looking crocodile that he sometimes puts on the beach. Back in 2006 this crocodile made headlines in the Fraser Coast Chronicle when it scared some Korean tourists. And this seems to be where The Telegraph, five years later, picked up the notion that Fraser Island's beach is croc-infested. Links: Media Watch, Sydney Morning Herald.

Ah, the Slow News Day, where the sensationalist newspapers have to come up with something... sensational... in order to justify existence. All sorts of amusing lapses in fact-checking occurs under such conditions.
Posted by Robin Bobcat  in  Californian Wierdo  on  Wed Oct 26, 2011  at  12:28 AM
Why do people always jump to the conclusion that *everything* down here will kill you?
Posted by Nettie  in  Perth, Western Australia  on  Wed Oct 26, 2011  at  06:23 AM
Um, maybe because everything down there WILL kill you? O.o
Posted by daveprime  in  Deep in the sticks...*yay internet!!*  on  Thu Dec 01, 2011  at  09:29 AM
but dingoes ARE dangerous
Posted by wnitl  on  Fri Mar 23, 2012  at  02:18 AM
Commenting is not available in this channel entry.