The Dissolving Bathing Suit Hoax of 1930

A 1930 news story about women pranked by a dissolving bathing suit turned out to be a hoax — but it had a long subsequent career. 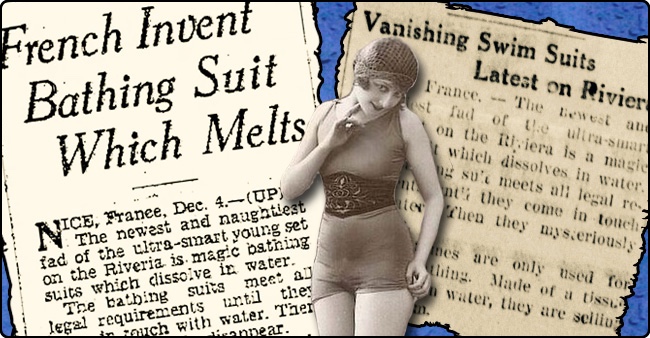 Webb Miller (1891-1940) was an American journalist best known for his war reporting. He was nominated for a Pulitzer Prize in 1922 and 1927. However, he also made a small contribution to the study of hoaxes, because in his 1936 memoir, I Found No Peace, he included an account of a hoax story that the media fell for — a hoax that might otherwise have faded away into obscurity, without ever having been publicly flagged as false.

It was the Dissolving Bathing Suit Hoax, which involved a scandalous trick bathing suit that supposedly melted away upon contact with water.

Miller didn't provide an exact date, but wrote that the hoax came to his attention while he was chief of the Paris bureau of United Press. So that would have been in the early 1920s. Here's his account of it (I Found No Peace, 1936, 144-145):


In Paris I encountered an unusual illustration of the necessity of checking carefully even insignificant stories. My friend Bartley Grierson (this name is fictitious) obtained from a source he thought to be reliable a story about remarkable house parties given by a British millionaire on the French Riviera. According to information Grierson received, a new synthetic fabric had been discovered which instantly dissolved upon contact with salt water. The millionaire had a number of women's bathing suits made from the fabric. When he gave a party, he always suggested a swim in the Mediterranean and provided the suits for his women guests. The moment they entered the water, according to the story, their suits disappeared.

A few days after Grierson cabled the story, he received a cablegram from his managing editor asking that several of the suits be shipped to him. He said a prominent official of a bathing-suit manufacturing company, which advertised in his newspaper, wanted the suits.

When Grierson checked the story, to his chagrin he found that no such fabric existed and that the story was a hoax. He hated to admit to his editor that he had been lax in checking the story. Therefore, he hit upon the expedient of cabling to his editor: "Cannot ship suits because would dissolve in salt sea air."

The editor immediately cabled back: "Put them in tin box have it hermetically sealed." Grierson was on the spot.

He obtained a tin box and put into it a couple of handfuls of finely pulverized breakfast food. He then had it hermetically sealed and shipped it to his editor, who was thereupon convinced that the suits could not be shipped across the Atlantic.
The News Report
The hoaxologist Curtis MacDougall summarized Miller's story in his 1940 book Hoaxes, which is how I first came across it, almost 20 years ago.

Over the years, out of curiosity, I would occasionally search through newspaper archives trying to find the correspondent's report about the dissolving suit, as it appeared in American papers. However, I could never find anything, and I eventually began to wonder if Miller's story was itself a hoax — one of those tall tales that circulate within the news industry.

But just recently I happened to search for it again and struck upon the correct pattern of keywords that pulled it up. It turns out the story ran in December 1930, by which time Miller was European Bureau Chief. So he evidently got his times a bit mixed up in his memory. But otherwise the news report was pretty much as he described it, although it didn't mention any British millionaire. 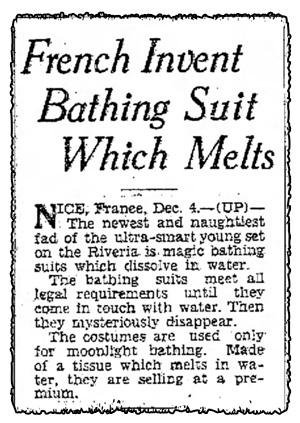 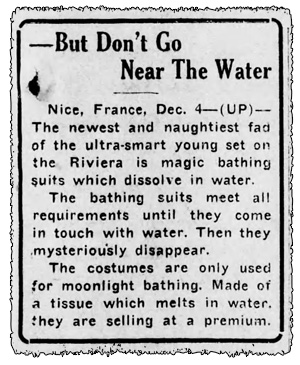 Questions
Did the reporter ("Grierson") who fell for the hoax really send his boss a tin box full of pulverized breakfast food? That part may well be an embellishment.

Also, did the reporter fall for a deliberate hoax, or did he report an urban legend as news?

It's impossible to know, but I suspect it's the latter because the story has no identifiable author (a hallmark of an urban legend), and it sounds like the kind of urban legend that would have circulated in the 1920s and 30s. First because it played upon stereotypes (perhaps justified) about the decadent lifestyle of rich Europeans. Second, because at the time the idea of a water-dissolvable fabric was plausible, given that there really was a lot of advancement in fabric technology at the time (cellophane had been patented in 1912; nylon was first produced in 1935). And finally, because the story evoked the fear of the "naked body publicly exposed," which is a classic recurring theme in urban legends (See Jan Harold Brunvand, The Vanishing Hitchhiker, pgs. 125-152).

Other, better-known examples of the naked-in-public theme include the guy who gets trapped naked outside his hotel room, as well as the "nude surprise party" in which an executive, invited to his secretary's apartment, thinks it's for a sexual dalliance, so he strips naked when she excuses herself from the room, only to discover that she's organized a surprise birthday party for him.

In 1935, wire services ran a story about one "Miss Cassie Moses" who had invented a soluble bathing suit: "Once wet, the filling between the suits' mesh dissolves leaving a net suit. Just why she invented the suit, Miss Moses hasn't revealed."

This soluble suit was said to have been exhibited at the National Inventors Congress held in Chicago. So maybe it was real, although it sounds suspiciously like the 1930 story. 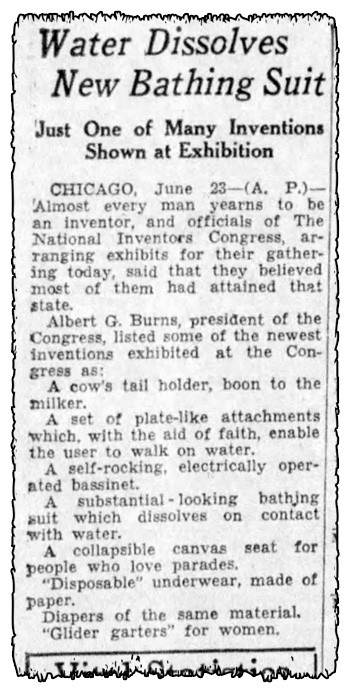 In 1966, newspapers reported that Parisian designer Michel de Lacour had created a bathing suit that was guaranteed to disintegrate in water, so that women could "walk 'respectably dressed' from the hotel for a midnight bathe in the nude."

As the news item pointed out, "Mr. Lacour hasn't suggested yet how the girls will return." A bathrobe would have solved that problem, but then there would have been no need for the dissolving swimsuit in the first place. 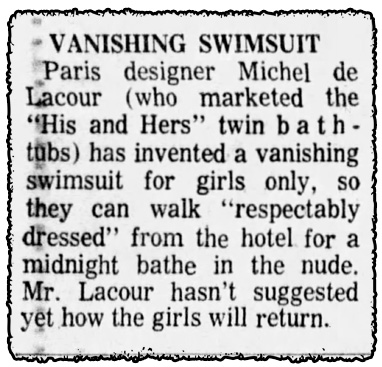 And in 2009, a story circulated about a dissolvable "Get Naked Bikini" sold by a German company. Presumably this product was real, since you can still buy one (It costs 14.99 EURO). Which makes this a case of an urban legend that has become a reality. 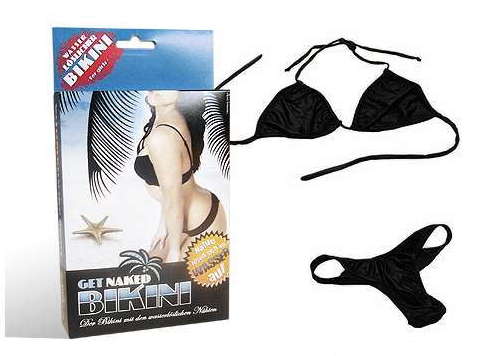 Finally, on his Legends & Rumors blog, Brian Chapman has collected some other references to dissolving swimsuits.

Most notably, dissolving swimsuit stories were featured twice in the Weekly World News. The first time in 1994, with a story about a "perverted prankster" in Brazil who was selling dissolving swimsuits to unsuspecting women. And the second time in 2004, with a story about Australian inventor Bryan Marple who was "convinced his latest fun gag gift would finally make him rich when he created a bikini that melts when it hits the water." 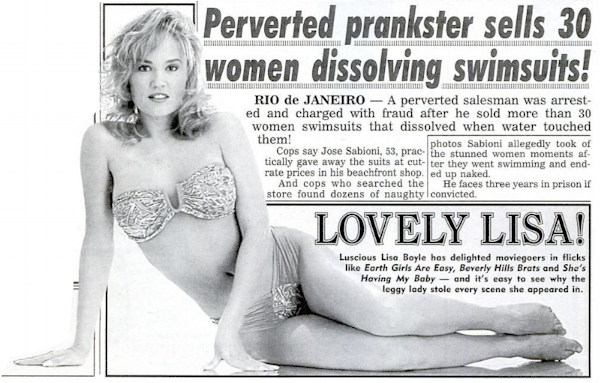 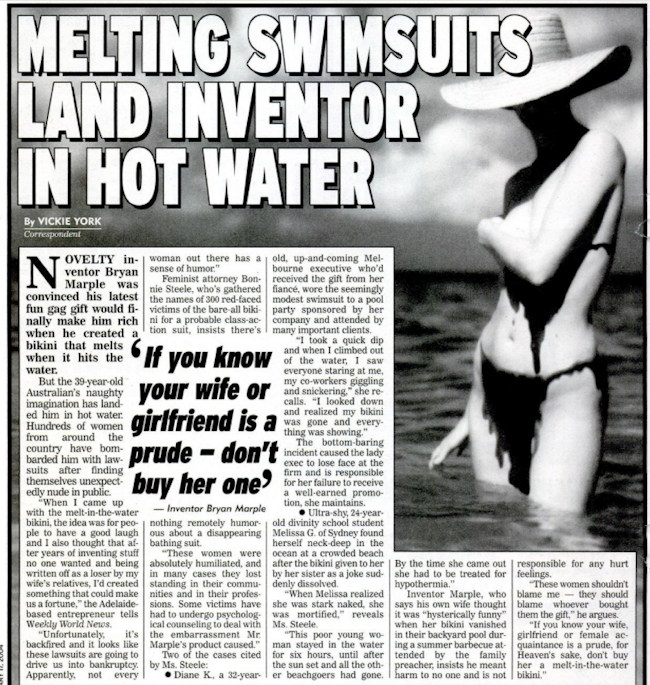 I have no idea if these were actual news stories, or if the Weekly World News invented them.