On April 1st of this year, hundreds of thousands of men with mustaches are going to gather in Washington, DC to demand tax equity for Mustached Americans. They're hoping to persuade Congress to adopt the Stimulus To Allow Critical Hair Expenses Act, or STACHE Act. The act would allow Mustached Americans to claim tax deductions for expenses such as: 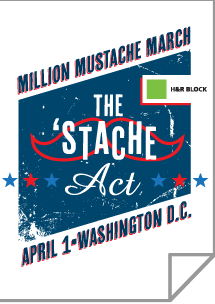 At first, I assumed the entire thing was an April Fool's Day joke campaign organized by H&R Block. But I now think that the American Mustache Institute was around before H&R Block got involved -- though it's obviously a rather tongue-in-cheek organization.

John Yeutter, an accountant at Northeastern State University, wrote a paper in 2010 titled, "Mustached Americans And The Triple Bottom Line: An Analysis Of The Impact Of The Mustache On Modern Society And A Proposal For A Mustached American Tax Incentive." The idea for the Mustached March on Washington seems to have been inspired by that paper, and gained momentum, eventually attracting H&R Block as a sponsor.