This Day in the History of Hoaxes: September 7 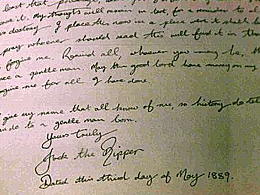 September 7, 1993: The Diary of Jack the Ripper
On this Day in 1993, Warner Books cancelled its planned publication of The Diary of Jack the Ripper, having concluded the diary was a hoax. The diary implicated Liverpool cotton merchant James Maybrick as Jack the Ripper. However, the handwriting of the diary did not match known samples of Maybrick's handwriting. The provenance of the diary (where it came from) was also extremely murky. It's possible it was a forgery from the 1920s or 30s that was only found in the 1990s. However, debate about the diary still continues. [wikipedia]