This Day in the History of Hoaxes: September 26 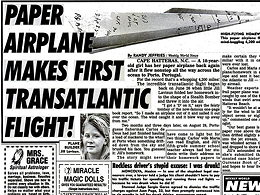 September 26, 1995: Transatlantic Paper Airplane
On this day in 1995, the Weekly World News reported that a paper airplane thrown by a school girl in North Carolina had been lifted up by "turbulent winds" and landed in Portugal. The article promptly made its way onto the Internet, where many people mistook it for real news, including the producers of The Family Channel TV special Unbelievable, who admitted that they made dozens of calls trying to track down the girl named in the story. [Weekly World News]