Making It Pleasant For The Horse, 1884

A recent article by Barry Smith in the Elko Daily Free Press delves into the tall tales and hoaxes that were the hallmark of Nevada journalism in the late 19th century. Mark Twain is the best known of these Nevada journalist hoaxers. But another master of the art form was Sam Davis, creator of the apocryphal Wabuska Mangler, as well as inventor of a horse-raising horse cart. Smith explains:


You may have passed through Wabuska on your way from Weeks to Weed Heights without realizing this tiny hamlet once had a feisty newspaper called the Mangler.

The Wabuska Mangler was entirely made up by Sam Davis, who was editor of The Morning Appeal in Carson City from 1879 to 1898, as a way to get outrageous opinions into the Appeal by attributing them to somebody else. The Mangler was a “wicked little sheet,” Davis wrote, and its editor “a disgrace to journalism.”

One of Davis’s more far-reaching hoaxes was of a horse cart invented by a local blacksmith. It featured a belly-band four feet wide beneath the horse, which enabled the driver to turn a crank and raise the horse off the ground. That way, at the top of a hill, both cart and horse could coast to the bottom.

The story, fed by follow-ups in the Appeal including an illustration, spread around the country until fellow editors called his bluff.
After a little searching, I managed to track down Davis's article about this horse-lifting horse cart. It ran in papers in late 1884/early 1885. It was usually titled either "The Cart Before The Horse" or "Making It Pleasant For The Horse." The cart was said to be the creation of a blacksmith named Mr. Torreyson.

I've reproduced the text of it below. Plus, I was also able to find an illustration of the horse cart reproduced in the Pacific Rural Press, Vol 29(15), April 11, 1885.

The "Bergh" mentioned in the subtitle of the article was Henry Bergh, founder of the American Society for the Prevention of Cruelty to Animals. 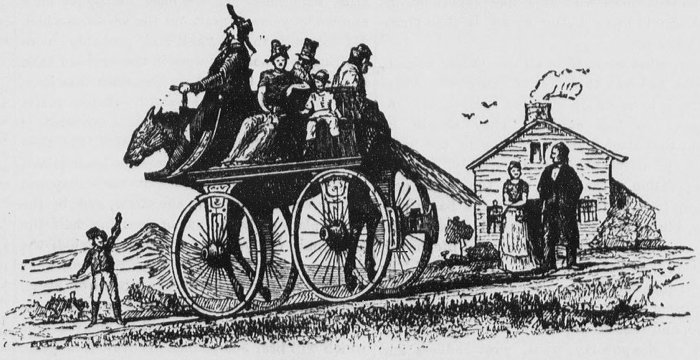 Mr. Torreyson, the blacksmith, of this city, is noted for his kindness towards animals. He has just built a road cart, now on exhibition at his blacksmith shop, which is destined to revolutionize traveling by road and to materially lighten the labors of that noble animal, the horse. The idea is to occasionally give the horse a chance to ride in the cart as the driver. the idea was first suggested to Mr. Torreyson by seeing a turtle move along the road carrying his shell with him. The vehicle made by Mr. Torreyson has four high wheels and the place between them arched, so that the horse is hitched under the wagon between the wheels, his head projecting a little beyond the front wheels and his tail just barely clearing the hind wheels. The driver sits just over the horse's neck and the others in the wagon face outward on each side. The horse is so fastened that the pulling is distributed over his body and does not all come of his neck and shoulders. In this position he is greatly protected from the sun and storm and thereby enabled to make long journeys with less fatigue.

But the principal part of the invention lies in a belly-band about four feet wide passing under the horse. When you reach the top of a long hill, down which a horse would have to go slowly as he held back the load, you simply turn a crank and it lifts the horse off its feet several inches from the ground and the vehicle then runs down the hill of its own momentum. It is provided with a steering apparatus and a brake, that the vehicle may be steered and its velocity regulated.

Several times during the day the tired horse has a chance to ride and is very much rested. Also when the horse attempts to run away you wind up the crank and he is lifted off the ground perfectly hopeless.

:lol: It's pretty funny - knowing me if I was back in the day I'd probably wanted it to give my horse a break. It would have taken some time for me to realize it was a hoax.
Posted by Christine  on  Wed Nov 12, 2014  at  07:25 AM
Commenting is not available in this channel entry.