A news story has been circulating recently about a west African preacher, Franck Kabele, who drowned while trying to show his congregation that he could walk on water just like Jesus Christ. 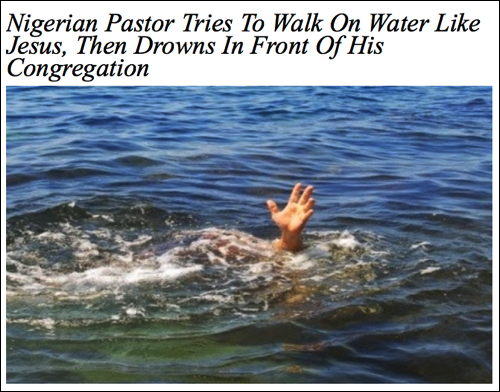 source: ReportGhanaNews.com
This story is almost certainly a hoax that media outlets are repeating as real news.

The Christian Post notes that this story about Franck Kabele was first reported in British papers back in August 2006. They say it first appeared in the Scottish Daily Record, but I found it printed a day earlier (Aug 29, 2006) in the London Evening Standard, as follows:

A PRIEST in Gabon has drowned as he tried to demonstrate how Jesus walked on water.
Franck Kabele, 35, told churchgoers in the west African country's capital Libreville that after a revelation he realised that if he had enough faith he could walk on water like Jesus. "He took his congregation to the beach in Libreville saying he would walk across the Komo estuary, which takes 20 minutes by boat," said an onlooker. "He walked into the water, which soon passed over his head and he never came back."

The story had no byline. No details were provided about what church this priest belonged to. And further information never materialized. The story eventually ran in quite a few papers, but always with the exact same details and lack of sources. All of which raises red flags. 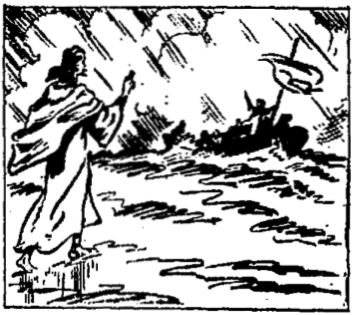 So where could this story have come from? Well, digging deeper back into news archives, I found a similar Reuters story that ran back in October 1993. Here's the version that ran in the San Francisco Chronicle:

A group of Tanzanian students and a minister who tried to walk on water have drowned in Lake Victoria, police said yesterday.

The members of the Seventh-day Adventist church were traveling in a flotilla of canoes to a religious festival when they decided to make the walk on water .

"They decided to test their faith by walking on the water like Jesus, but they all drowned,'' a police spokesman said.

Other participants in the pilgrimage looked on helplessly from the shore as the victims drowned. Police are questioning four ministers who arranged the pilgrimage, but they said parents and relatives of the dead will not press charges.

This story had a lot more details, but it turned out to be a case of incorrect reporting. A week later the Seventh-day Adventist Church issued an official statement denying the report:


"Contrary to what Reuters reported, the fact is that on Sat., Oct. 23, a group of Pathfinders (a Scout-like organization) who had gone by boat to attend a Pathfinder rally on a nearby island met with a tragic accident on their way back. Their boat capsized. Of the 20 people in the boat, eight girls and two adults drowned. Ten other young people swam to safety... None of the church members involved was trying to 'walk on water'."

So here's my guess about what happened. The 1993 story about the Tanzanian students and minister drowning must have transformed into an urban legend that circulated in Africa. Details were changed. The students were omitted. The location shifted. But the key detail about a church leader drowning while trying to walk on water remained.

Until eventually, in 2006, the story was heard by a reporter, who wrote it up as a news story and sent it out via a news-wire service, from which it was picked up by British papers that never bothered to fact-check it.

And seven years later it's surfaced again. Proving that a good story never dies. It just gets recycled endlessly.

(Thanks to LaMa for first calling attention to this story in the Hoax Forum.)

I think it's more likely that someone was ridiculing their faith and calling them all stupid for believing in Jesus.
Posted by Lorena  on  Tue Aug 25, 2015  at  01:21 AM
Commenting is not available in this channel entry.