Artist Tracey Snelling has created an installation which she calls Last House on the Left. It consists of 4 miniature houses from horror films (The Birds, Halloween, Nightmare on Elm Street, and the Amityville Horror. It's the Amityville Horror Dutch Colonial that caught my eye. If I ever did have a brick-and-mortar hoax museum, it would make a great addition! 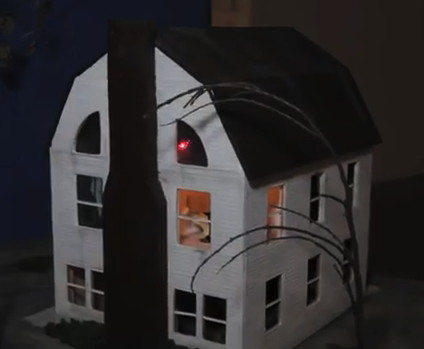 Snelling's miniature houses feature sound effects as well as tiny LCDs that play clips from the films when you look through the windows. The installation is currently on exhibit at the San Jose Institute of Contemporary Art.

The Stark Insider blog has posted a video of the Amityville house on display:

Update: According to Tim Farley, today (March 6th) is the 37th anniversary of Ed & Lorraine Warren investigating the Amityville Horror house with a TV news crew.