This Day in the History of Hoaxes: May 20

May 20, 1775: The Mecklenburg Declaration of Independence 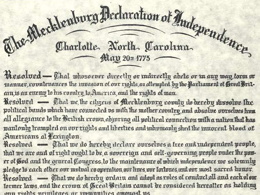 On May 20, 1775, so it is said, Mecklenburg County in North Carolina declared independence from Great Britain, more than a year before the Continental Congress in Philadelphia did so. This would have been the earliest American declaration of independence, if it actually happened. But no original copy of this Declaration survives. Nor do any credible contemporary references to it, leading most historians to conclude that the Mecklenburg Declaration was invented years later. [wikipedia, New River Notes]
May 20, 1975: results of caltech sweepstakes caper announced.