A story posted recently on the fake-news site DailyCurrant.com alleged that hospitals in Colorado were being overwhelmed by people suffering from marijuana poisoning. There were 37 people dead already! 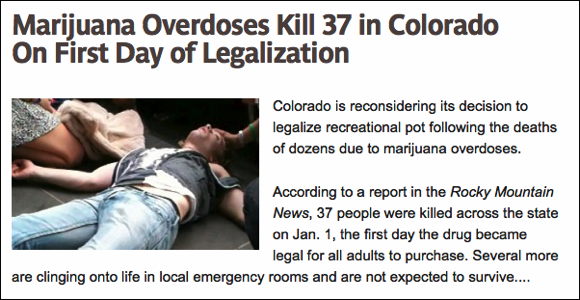 The article quoted a Dr. Jack Shepard of St. Luke's Medical Center in Denver as saying, "It's complete chaos here. I've put five college students in body bags since breakfast and more are arriving every minute."

Enough people believed this story that St. Luke's Medical Center (which is a real hospital) felt compelled to issue a statement denying the report:

The name Dr. Jack Shepard is an allusion to the fictional doctor on the TV show Lost.

Update: Among those who apparently were taken in by the Daily Currant's article was Sweden's Justice Minister Beatrice Ask. She shared the article on her Facebook page, along with the comment, "Stupid and sad. My first submitted proposal in the youth wing was called 'Crush drugs!'. In this matter, I have not changed my judgment at all."

She was subsequently heavily criticized for sharing the article (and apparently believing it). However, her press secretary told the Aftonbladet newspaper that she had been aware the article was satire. [thelocal.se]

I thought one of the prerequisites for a fake news site is that it be funny.
Posted by Kerry Maxwell  on  Sat Jan 04, 2014  at  11:16 AM
Kerry: You'd think so, wouldn't you? But these days apparently it also suffices if it's politically desirable.
Posted by Richard Bos  on  Sun Jan 05, 2014  at  07:01 AM
Commenting is not available in this channel entry.