This Day in the History of Hoaxes: July 22 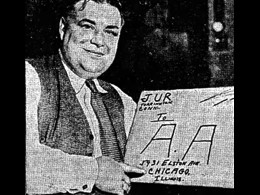 July 22, 1931: Mr. A.A. declared man with shortest name
On this day, Mr. A.A. (first name Aaron) was declared to be the man with the shortest name in the United States, following the death of H.P. Re. But within a month he was revealed to be a fraud after he was charged with forgery and a judge issued a warrant for his real name, Earl Gerske. Mr. A.A. was merely an alias, Gerske explained, adopted on account of a deal with a laundry company so that "they could advertise that the phone number of their laundry was the first one listed in the directory."