Johan Lehrer tries to understand himself

In July 2012, science writer Jonah Lehrer resigned from The New Yorker under a cloud of shame, after it was revealed that his latest book, Imagine, was full of fabricated quotations. Yesterday, he took what he may have been hoping was a first step toward rehabilitating his public image by giving a confessional talk at a Knight Foundation seminar in Miami.

If image-rehabilitation was his goal, it probably didn't work, because most of the coverage of his talk was snarky and cynical about his intents, especially after poynter.org reported that he was paid $20,000 for speaking.

As Lehrer spoke, a giant screen behind him showed real-time tweets about the talk, many of which were openly derisive of him, adding a surreal element of public shaming to the event. 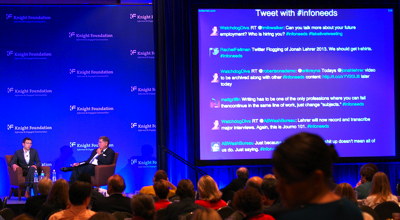 source: palewire
During the talk, Lehrer delved into the scientific literature about error, trying to apply what he found to his own errors and figure out how not to do it again. Craig Silverman offers a good response to what he said:


Lehrer went looking for answers in the same places he used to mine for his articles and books — research papers, cognitive science, and in seemingly surprising places, such as the FBI. He drew oversimplified and in some cases incorrect conclusions about what he found. Then he packaged it all into a polished story, and cashed a nice cheque in the process.
It's all too familiar, and worst of all I think Lehrer is completely ignorant of the fact that he fell into his old methods, his old practices, as he worked to try and understand why he did what he did.
Take Lehrer's example of how a car is built to make a noise when you forget to put on your seat belt. This is meant to "force" you to take the proper action. He compared that to his new commitment to always have his work fact-checked, to adhere to his own set of SOPs meant to combat his seemingly inherent desire to cut corners and lie.
It's a false comparison.
Forcing mechanisms are meant to guide us to make the right decision. They help remind us and usher us away from an unintentional error. They do nothing for someone who consciously chooses to subvert the system.
Lehrer isn't the guy who forgot to put on a seat belt and got into an accident. He's the guy who heard the seat belt reminder dinging and said, "F**k it, that belt is just going to put wrinkles in my shirt."
Lehrer didn't make accidental mistakes. He repeatedly and consciously committed serious ethical transgressions, then lied about them.
Update: The Knight Foundation now says it was a mistake to pay Lehrer so much. That doing so was "tantamount to rewarding people who have violated the basic tenets of journalism." Also, a Forbes reporter managed to contact Lehrer and asked him if he would consider donating the money to charity. Lehrer replied, "I have nothing to say to you."