But The Atlantic Wire points out that the photo is actually a composite. The background is a photo of Mount Damavand from a stock-image site. The jet fighter was cut-and-pasted from a photo of what is apparently a plastic jet fighter (because it seems to lack exterior bolts or rivets) on display indoors. 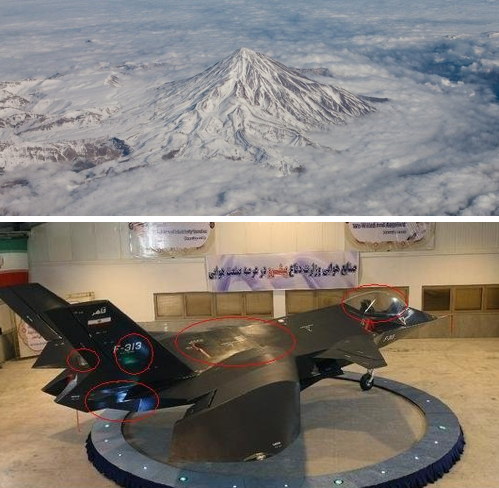 In Iran's defense, the photo could have been intended as a kind of mock-up of what the plane would look like while flying. But given the Iranian military's past history of photoshopping, no one is cutting them much slack.

The Guardian suggests that the purpose of the photo was not to fool skeptical westerners, but rather to pull the wool over the eyes of the Iranian people by leading them to believe that their country is more technologically advanced than it really is.

As if the original photos of their 'jet' weren't hysterical enough, this was downright hilarious.

If they're gonna fake something, they should have gone for something even more dramatic, like a flying wing or saucer design.
Posted by Robin Bobcat  in  Californian Wierdo  on  Wed Feb 13, 2013  at  10:02 AM
Commenting is not available in this channel entry.