How Man is Made Invisible


Here's a hoax (see attached). Presumably done with double-exposures, but it would be nice to know how many people he fooled and why he did it.
It's from 'The Encyclopedia of Modern Wonders for Boys', published by Collins apparently in the 1930s. Googling 'Herbert Winck' gives one reference to the same pictures in 'The Wonder World Encyclopedia' from 1936, also published by Collins. As you'll see from the caption, the pictures fooled at least one person. 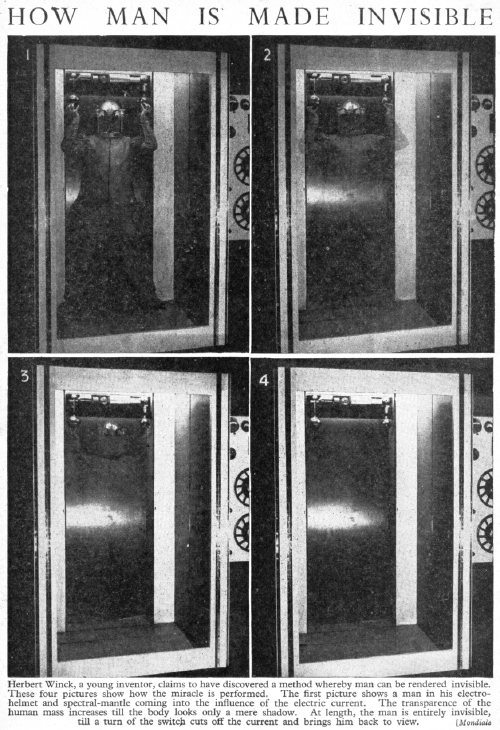 I assume the pictures were created via double exposure, in the same way spirit photographs are usually made. As for Herbert Winck, I can't find out anything more about him. But searching the google news archive for articles about invisibility machines, I did come across a March 3, 1937 article in the Chicago Tribune about an Italian inventor who supposedly created something that sounds very similar to Winck's machine. The article was syndicated. A similar version also ran in the Washington Post.

Rome, March 2 -- (AP) -- Prof. Mario Mancini, who makes people disappear by "purely scientific principles," insisted today he was not a magician -- and "I do not use mirrors." Mancini, 33 years old and former professor of physics at Breda academy here, made his wife and sister disappear before the eyes of an Associated Press correspondent at his home in Milan. He would not explain beyond saying: "It is simply a scientific instrument which nullifies the rays reflected by opaque bodies."

Uses Wooden Box.
A huge wooden box, of practically cubical shape, the sides of which were about eight feet long, occupied nearly half the drawing room where the professor held his demonstration. The side toward the observer apparently was open but in reality was closed by a sheet of transparent glass. The professor's wife and sister entered the box through a side door and seated themselves in chairs. While Prof. Mancini dangled his legs over the side of a table on which the electrical controls were placed the two subjects inside the box talked to each other and those in the room.

Outlines of Women Vanish
The professor pressed a button illuminating the box inside. Simultaneously there was a distinct buzzing sound. After a few moments the outlines of the two women and the chairs became more and more indistinct until they disappeared completely. The voice of the two still could be heard, however. After another moment the controls were reversed and the two subjects and chairs came back into clear view.

I wonder if this illusion is similar to the old carnival side show where a girl is turned into a gorilla?
Posted by Barry Patterson  on  Thu Dec 04, 2008  at  11:15 PM
Jesus, Barry, you beat me to the Ape Girl reference! I was just about to mention it when I saw your posting. Yeah, it looks like the same illusion to me, just not using a second person dressed as an ape or something else.

If we're right, then it definitely uses a mirror, no matter what the guy said.
Posted by Cranky Media Guy  on  Fri Dec 05, 2008  at  03:38 AM
Sounds like a good old fashioned Pepper's Ghost illusion (http://en.wikipedia.org/wiki/Pepper's_ghost). This is what Disney uses for some of their Haunted Mansion effects.
Posted by Moonliner  on  Fri Dec 05, 2008  at  05:15 AM
"It is simply a scientific instrument which nullifies the rays reflected by opaque bodies."

A piece of black velvet would do nicely to "nullify rays reflected by opaque bodies", but, alas, that wouldn't render them invisible -- just black.
Posted by Gutza  on  Fri Dec 05, 2008  at  06:13 AM
It seems my guess about the double exposure may have been wrong - looking at Winck's setup, it could have used the Pepper's Ghost principle, with the space containing the figure hidden behind the left side of the box. That might explain why the camera isn't placed square-on, which could have allowed a view into the hidden space.

Poor Winck. He probably hoped for fame, but his last trace seems to be nothing more than an unconvincing photograph of him in a diving suit fading slowly away.
Posted by Hudson Pace  on  Fri Dec 05, 2008  at  07:34 AM
Now that I think of it, maybe he just asked the audience to close their eyes and count to ten 😉.
And Peppers Ghost was what I was thinking of, thanks for the info.
Posted by Barry Patterson  on  Fri Dec 05, 2008  at  11:57 AM
I think you've put your finger on it, Hudson.
Posted by Cranky Media Guy  on  Sat Dec 06, 2008  at  02:08 AM
Commenting is not available in this channel entry.