History of Formosa on display 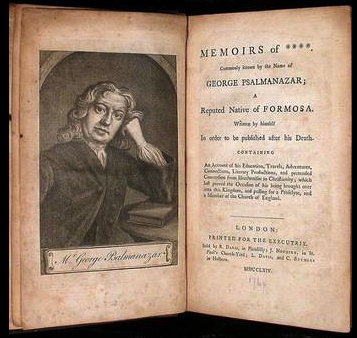 St. John's College in Cambridge is inviting the public to view a famous artifact from the history of hoaxes — a first-edition of The History of Formosa written by George Psalmanazar. [link: Belfast Telegraph]

Back in the early 18th century, Psalmanazar posed as a native of Taiwan and had many of Britain's educated elites believing the ruse, even as he invented bizarre stories about the customs of Taiwan.

If there was a real Museum of Hoaxes, this would be a great artifact to have on display. But it also shows the difficulty of ever having such a museum, because it turns out these artifacts are incredibly expensive, making the cost of acquiring them prohibitive.

Unless the museum were full of fake copies of these artifacts. Fakes of fakes.

If you think the cost of acquiring such artifacts would be prohibitive, image the cost of the security measures required to protect them, and the psychological burden of being responsible for them. Fakes of fakes would be in keeping with the museum's theme. I would love a genuine hoax museum to exist, but one of the benefits of the internet is that it doesn't have to. The exhibits are available for people to see, but through a glass screen rather than the glass of a case. Perhaps, one day, this site may host interactive 3D models of Fiji mermaids, jackalopes and flying saucers, and downloadable films and ebooks of bigfoots and formosan memoirs. For now, your work is invaluable, so keep it up!
Posted by Pete Byrdie  on  Sat Mar 15, 2014  at  12:11 PM
I also enjoy reading this blog and seeing the hoaxes from the comfort of my home. 😊 However, the Association of Certified Fraud Examiners actually does have a fraud museum in Austin, TX (http://www.acfe.com/fraud-museum.aspx). Every year at the annual convention they bring a traveling exhibit with lots of great displays from it. It is pretty neat to see some of these historic artifacts in person!
Posted by Erin  on  Fri Mar 21, 2014  at  09:30 AM
Commenting is not available in this channel entry.