The Gospel of Jesus’s Wife 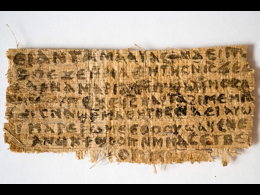 There's been a lot of news coverage recently about a fragment of ancient papyrus that contains language suggesting Jesus was married. Specifically, it contains the phrase, "Jesus said to them, 'My wife...'" So it's been called the "Gospel of Jesus's Wife."

A study published in the April issue of the Harvard Theological Review concluded that the papyrus fragment was an authentic ancient artifact. But now the tide is turning, and evidence is mounting that it's actually a fake. From the Washington Post:


Last week, an American researcher named Christian Askeland published findings that scholars say represent the most convincing evidence yet that the 'Gospel of Jesus's Wife' is a forgery. The conclusion hinges on two elements. First, an additional fragment provided to Harvard by its anonymous source was not only likely a forgery — but written by the same hand that had authored the "Gospel of Jesus's Wife." Second, it was inked in a dialect that academics say didn't exist at the time it was supposedly written.

...and there is a feminist Harvard professor still in denial about the fraud. Alas. For the idiosyncratic nature of gender logic see "Goddess Unmasked" by Paul Davies or transcripts of the public statements of Hillary Clinton.
Posted by The very rev. James barlow  on  Thu Nov 26, 2015  at  10:02 PM
Commenting is not available in this channel entry.