The latest issue of Chemical & Engineering News has an article that reviews the history of how the crystal "Aztec" skulls that began showing up in the mid-19th century were eventually found to be fake. The take home is that the following pieces of evidence led researchers to conclude the skulls were modern forgeries: 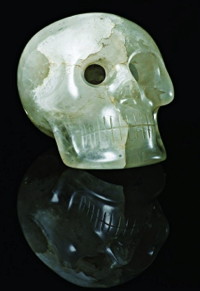 Humans seem to have a predilection for fake quartz-crystal Aztec skulls. Since the 1860s, dozens of skull sculptures have appeared on the art market purporting to be pre-Columbian artifacts from Mesoamerica, that is, created by the indigenous peoples of Mexico and Central America prior to Spanish exploration and conquest in the 16th century. Three such skulls have graced the collections of major museums on both sides of the Atlantic: the Smithsonian Institution in Washington, D.C., the British Museum in London, and the Quai Branly Museum in Paris.
As early as the 1930s, some experts began to have doubts about the authenticity of the skulls, says Margaret Sax, a conservation scientist at the British Museum. But for a long time researchers "didn't have the scientific means to follow up" on their hunches, she adds. Over the past two decades researchers at all three museums have capitalized on analytical science innovations to show that these peculiar skulls are not unusual Aztec artifacts but post-Columbian fakes.