Drone Delivery—not yet a reality

In March 2012, TacoCopter.com appeared online, claiming to represent a SF-area startup that planned to use drones to deliver tacos. That turned out to be a hoax.

And earlier this year, the French postal service claimed it was experimenting with using drones to deliver mail. That was an April Fool's Day hoax. 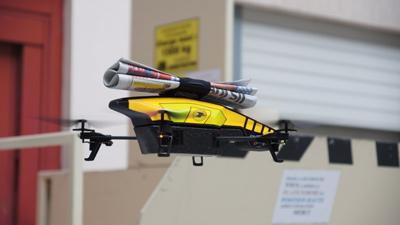 So the idea of drone delivery has been a popular idea with hoaxers. But now, perhaps, it's going to become a reality. The emphasis is on perhaps. Australian textbook rental service Zookal claims that next year it will begin to use drones to deliver textbooks in Sydney. This will allow it to deliver the textbooks in mere minutes, as opposed to the 2 or 3 days it would take by the mail. The drone company Flirtey will supply the flying robots.

Flirtey Zookal flight from The PR Group on Vimeo.

But Australian tech blog Delimiter cautions that while Zookal's announcement doesn't appear to be a hoax — the company appears to genuinely want to do this — it is also far from becoming an actual service. The idea is still very much in the "research and development phase," and has to clear a lot of regulatory and technological hurdles before it could become a reality. So the anticipated 2014 rollout of the service looks to be very optimistic.