The Disappearance of Rozel, 1897

Rozel is a small town in the middle of Kansas. Population: 156. It was founded in 1886 — its main reason for existence being that it served as a stop on the Santa Fe railroad line. Throughout its history, it hasn't been in the news much. The one time it did receive national attention was back in 1897 when it supposedly disappeared, swallowed up by a giant sinkhole.

The report of its disappearance went out in November 1897 and appeared in papers nationwide, including the New York Times: 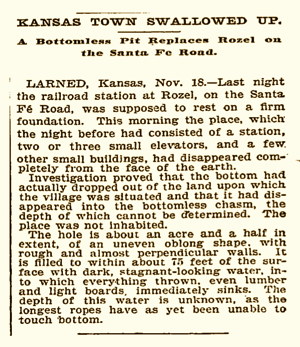 LARNED, Kansas, Nov. 18—Last night the railroad station at Rozel, on the Santa Fe Road, was supposed to rest on a firm foundation. This morning the place, which the night before had consisted of a station, two or three small elevators, and a few other small buildings, had disappeared completely from the face of the earth.

Investigation proved that the bottom had actually dropped out of the land upon which the village was situated and that it had disappeared into the bottomless chasm, the depth of which cannot be determined. The place was not inhabited.

The hole is about an acre and a half in extent, of an uneven oblong shape, with rough and almost perpendicular walls. It is filled to within about 75 feet of the surface with dark, stagnant-looking water, into which everything thrown, even lumber and light boards, immediately sinks. The depth of this water is unknown, as the longest ropes have as yet been unable to touch bottom.
However, the story of the town's disappearance came as a shock to the residents of Rozel, because as far as they could tell, the railroad station and surrounding buildings were all still there, intact. 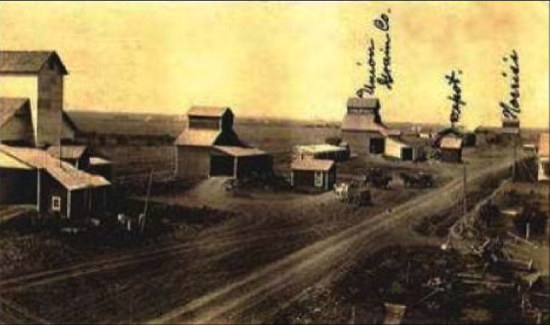 Rozel circa 1900, sinkhole-free
No one is entirely sure who invented the story of the giant sinkhole, but the leading suspect is Dick Beeth, a station agent in Larned, the nearest town.

The story goes that the railroad company had recently decided to move the Rozel train depot elsewhere where it was more needed. So workers had loaded the entire building onto a boxcar and shipped it off. This left a shallow hole in the ground that filled with water when it rained. Locals who saw this hole joked that the depot had been swallowed by a sinkhole.

When Beeth heard this joke, it inspired him to send out a story on the telegraph wire claiming that the entire town had been swallowed by a sinkhole. Local Kansas papers picked up the story and ran it, and then it spread to the national news. 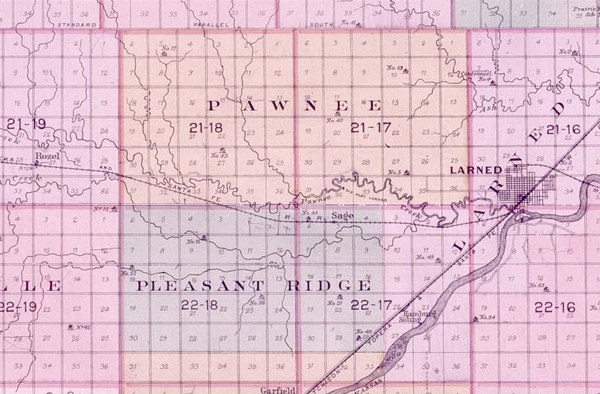 Map showing Rozel (on the far left) and Larned (on the right)
The "Rozel sinkhole" became a running joke in the region. But the fact that the story had been reported as fact in major newspapers continued to fool people for decades. In 1935, Professor Kenneth Landes, an assistant state geologist, wrote a booklet titled Scenic Kansas, in which he included the Rozel sinkhole as one of Kansas's more unusual sights, describing it as being one acre in size. A decade later, the Rozel sinkhole made its way into a Kansas school geography.

The town still remains standing to this day, its size and population not having changed much since 1897.

Is this hoax part of the basis for Pawnee, Indiana from the show 'Parks and Recreation'? It would explain why the characters in that show have a grudge against a neighbouring town.
Posted by Al Batross  on  Sat Jan 26, 2013  at  12:57 PM
I'm not stepping into anymore mud puddles from now on!
Posted by hulitoons  in  Abingdon, Maryland  on  Sat Jan 26, 2013  at  01:24 PM
Commenting is not available in this channel entry.