One of the easiest ways to attract attention online is to claim to have done something shocking or disturbing. It's also known as trolling. A case in point is a young woman (using the twitter account @illumivato) who recently claimed that she killed her dog because the British pop group One Direction wouldn't follow her on Twitter.

She first sent them a tweet asking them to follow her "or I'll break my dog's neck." Then, when they inevitably ignored her, she followed this up with a tweet showing herself cradling her dead dog. [nydailynews.com]

But as David Emery points out, the picture of her and her dog dates back a couple of months. Plus, she's been making similar threats via tweet for quite a while.

In other words, we can safely dismiss her as just another disturbed, attention-seeking individual online. And she got the attention she wanted. She also admitted via tweet a few days ago, "Are people still going on about this f*cking dog thing, I was trolling!!!! STOP." And then twitter suspended her account. 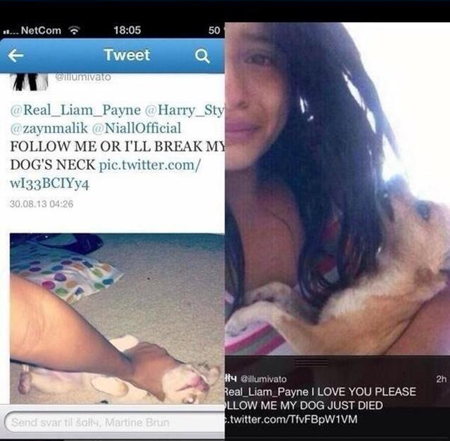