Dave Wilson insists he didn't get elected to the Houston Community College System Board of Trustees by "pretending to be black," though many people are now accusing him of doing exactly that. He says he merely ran a smart campaign and used "targeted marketing" to appeal to voters in the majority black neighborhood where he was running. 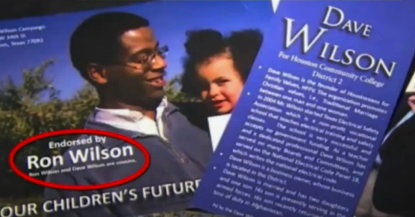 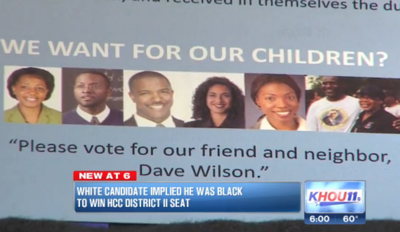 Yes, he avoided putting a photo of his own white face in his campaign literature, but included lots of stock photos of smiling black people. But there's nothing illegal in that.

And yes, he did prominently claim to be endorsed by Ron Wilson. People might have assumed that was the well-known black Houston politician called Ron Wilson. But if they did so, that was their own fault, because it was made clear somewhere (in the fine print at the bottom of the campaign flyer) that the Ron Wilson in question was Dave's (white) cousin in Iowa. [That brings to mind the "Subways Are For Sleeping" hoax from 1962 in which the newspaper ad for the Broadway play trumpeted the rave reviews it received from people who happened to have the same name as famous theater critics.]

Anyway, Dave Wilson is in office now, and will be for the next six years. And there's not much anyone can do to change that. [khou.com]